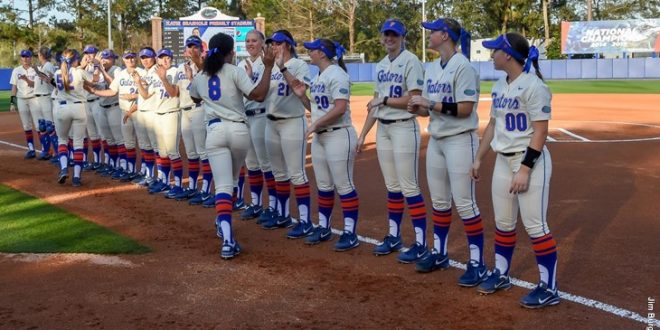 GAINESVILLE, FL – The Florida Gators now have won 10 of their last 11 games after winning four more this past weekend in the Aquafina Invitational, hosted by the Gators. Florida took on Florida A&M, Northwestern State, Maryland and FIU over the weekend at Katie Seashole Pressly Stadium to become Aquafina Invitational Champions.

The Florida Gators took the field at Katie Seashole Presley Stadium for the first time in 2017 season on Friday to face Florida A&M and Northwestern State to open up the Aquafina Invitational. In the first game against Florida A&M, the Rattlers only had five hits the entire game to total up to one run thanks to the combined effort of pitchers Kelly Barnhill and Freshman Katie Chronister. Barnhill threw four complete innings for 11 strikeouts. Chronister relieved Barnhill before the firth inning to receive the save after three innings. The Gators scored six unanswered runs, freshman Jaimie Hoover hit two RBIs to drive in three runs. The Gators won their first game against Florida A&M 8-1.

After a short break from the diamond, the Gators were back on the field Friday night to face Northwestern State. In the first inning, Kayli Kvistad broke up the scoring with a two run home run that scored sophomore Amanda Lorenz. The Gators and Lady Demons fought back and forth in the firth inning to tie it up 3-3. However, senior Delanie Gourley came into the game to relieve Aleshia Ocasio after she retired twelve straight to hold the Lady Demons to three runs. The Gators bats came alive to bring the final score to 9-3.

The Florida Gators started off their Saturday competition on a sour note after suffering their first loss of the season against Maryland. The Terps found a way to beat Florida thanks to the fourth and fifth inning with two RBI singles to drive in batters. In the top of the fifth the Terps were up two runs over the Gators. Florida made quite the effort to come back in the sixth inning. The Gators loaded the bases, but the weather had other plans. Right in the midst of a comeback the game was delayed due to heavy rain in the area. The delay lasted nearly an hour and a half before the teams could take the field again and the Gators were not able to complete the come back.

The Gators did not frown too long after their loss. Florida came back in the second game of the day to beat Northwestern State for the second time, this time 10-0. Florida scored in every inning of the game against the Lady Demons except for the third. The big inning came in the fifth where the Gators run ruled the Lady demons, the Gators scored five runs on just a pair of hits. Freshman Jordan Roberts recorded her first home run of the season in the firth inning.

The Florida Gators wrapped up the Aquafina Invitational with a win over FIU. The Gators jumped ahead thanks to Jaimie Hoover’s second career grand slam in the top of the first inning. Hoover is only a freshman and already has two grand slams on the season! Sophomore Kelly Barnhill took charge in the circle for Florida. She tossed five innings and recorded twelve strikeouts.

The Florida Gators will be back in action this weekend when they travel to Orlando for the Citrus Classic. They will take on Syracuse and Fordham University on Friday, Liberty and Elon on Saturday and Leigh University on Sunday.