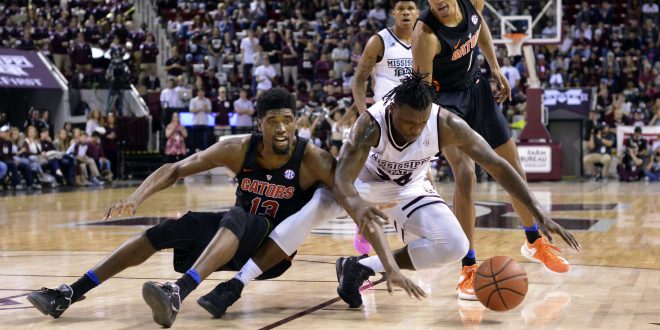 The Florida Gators Men’s Basketball team has been handed their fair share of injuries in the past few weeks. Gorjok Gak is out with a foot injury, John Egbunu’s season ended with a torn ACL, and Canyon Barry, the team’s leading scorer, rolled his ankle late in the game at Mississippi State and did not attend practice Sunday or Monday.

Despite being dealt these cards, Florida’s skills have not been hindered. In fact, some players have stepped into the spotlight because of their unequivocal effort.

Sophomore center Kevarrius Hayes says everyone has to step up because the games are still going to happen.

Hayes, Egbunu’s replacement, was a key contributor in the win against Mississippi State on Saturday.

Hayes had a slow start in the match up, but finished making huge plays on both ends. When it came down to the wire, Hayes racked up nine points and went 2-for-3 from the floor. He had 10 rebounds, a go-ahead basket and four blocked shots.

Hayes says it felt good knowing his team could depend on him.

The center preserved UF’s two-point edge after he stopped a game-tying attempt by MSU with 30 seconds remaining.

With Egbunu’s absence, Hayes has now taken on some new responsibilities while riding an eight-game win streak. He has to be vocal, play with energy and avoid foul trouble. Hayes averages 6.2 points and 3.8 rebounds while shooting a commendable 63.6 percent from the field.

Hayes says he has to stay smart in order to perform well for his team.

The 6’9” sophomore will need to be on his A-game once again. In their last game against South Carolina, there were 27 fouls called against the Gators. If Hayes cannot find a way to stay legal, Florida could be in trouble.

Hayes says even though the Gamecocks haven’t been playing their best basketball lately, the Gators will not take the competition lightly.

Florida is 0-2 against USC under Mike White, but the Gators will look to end that streak and earn their ninth straight victory Tuesday night in the O’Dome. The game starts at 7 p.m.

Previous Regional Final Preview: P.K. Yonge at Jacksonville Providence
Next Why Sacramento, Why?