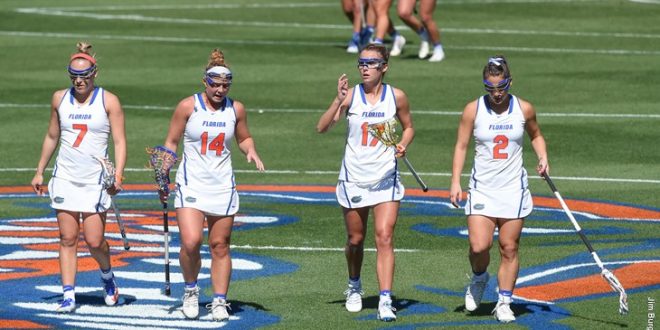 No. 4 Gators Prepare to Face No. 3 Trojans

Share
This Friday night is a big one for the Gators as it marks the one and only night game to be played at home all season. The Trojans (2-0) will be traveling to Gainesville for the first time from Southern California. Florida dominates when the moon is in the sky. They own a 30-3 record in night games.

The two teams have had different starts to their seasons before they face one another. The Florida Gators suffered a tough loss against No. 1 North Carolina on Feb. 11. The Tar Heels defeated the Gators (0-1) 13-10 despite impressive hat tricks from both Sydney Pirreca and Shayna Pirreca. That being said, the Gators did hold the Tar Heels to 13 goals, which is their lowest scoring production in a game this season. While the Gators head into Friday night with a losing record, the Trojans have two wins under their belt. The girls from Southern California beat St. Mary’s 20-2 to start their season and continued this streak with a win against No. 9 Northwestern.

Although the Gators are coming off a tough first loss, the team is using this as a positive learning experience. The girls have put this loss behind them and are excited for the opportunity to take on another top ranked team in the country. Coach Amanda O’Leary has high expectations for sophomore Haley Hicklen in the goal. Hicklen has immensely improved every year since she first started as a Florida Gator. “She is a competitor, yet doesn’t get rattled,” said O’Leary. This contributes to her being a calming force on the defensive end for the Gators. Hicklen’s greatest accomplishment has been increasing her confidence level in her ability to make clears calmly and accurately.
Hicklen’s strong performance protecting the net and quickly clearing the ball can give the Gators more opportunities to attack the Trojan defense.
Florida hopes for consistent performances from two freshman players who had solid games against UNC. Cara Trombetta was strong on the defensive end, while Brianna Harris held together the midfield.

What Do the Gators Need to Look Out For?

As they prepare to take on the No. 3 Trojans, the Gators have no previous experience competing against South California. O’Leary looks forward to seeing what her team can put forth against this team of strong talent. Despite not having played the Trojans before, the Gators are watching film in order to make a successful game plan for this Friday night. University of Southern California’s Gussie Johns is one aspect Florida’s offense needs to be prepared for. A U.S. National Team member, Johns’ solid performance in the goal is a major contributor to the Trojan’s success so far this season. In addition to Johns, the Trojans have additional obstacles for the Gators to overcome in order to get points on the board.
USC plays an impressive zone defense, which causes a need for alteration in Florida’s usual offensive attack. O’Leary is prepared to make adjustments to her team’s offensive play. In terms of individual players to look out for, freshman Kerrigan Miller and Canadian National Team Memer Lidya Sutton are both strong in the midfield. The Trojans also have senior Michaela Michaels on the attack who was named Player of the Year in her conference. Due to Michaels’ terrific performance in the circle, Florida is focusing a lot on the draw. Bearing all of this in mind, O’Leary and her team look forward to taking on the Trojans this Friday night.
Share