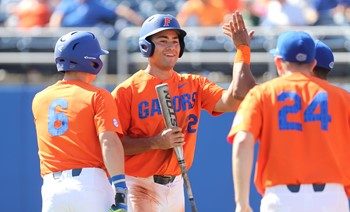 The third-ranked Florida Gators baseball team is off to a good start, sweeping its first series against the William and Mary Tribe. The Gators got off to a slow tribe against the Tribe, however, as they were down in the first game of the series 4-1. Florida eventually rallied with four straight runs. Head coach Kevin O’Sullivan said he thought his team got better as the weekend went on. They look to start 4-0 with their game against Jacksonville tonight.

The Gators’ offense is off to a good start, averaging eight runs a game on a .311 batting average. Junior infielder Dalton Guthrie leads the team with five runs scored on a .417 batting average and five hits. Sophomore infielders Jonathan India and Deacon Liput both lead the team with four RBIs. Guthrie had a particularly good game in the series finale against William and Mary with three runs, two hits and one RBI in three at-bats.

The offense will be tested against Jacksonville’s pitching which has been solid so far. The Dolphins’ pitching staff has allowed six earned runs leading to a 2.00 team ERA. Sophomore right-handed pitcher Chris Gau has carried the team with 13.5 strikeouts per nine innings with no earned runs.

The Gators’ pitching staff has allowed nine earned runs on a team ERA of 3.34. Sophomore Alex Faedo, who is widely expected to be a top pick in the 2017 MLB draft, started the first game and struggled, allowing four runs in 4.2 innings pitched. Sophomore right-handed pitcher Michael Byrne eventually came in relief and won the game, pitching three scoreless innings with three strikeouts.

Florida’s pitching staff will be going up against a Jacksonville offense that’s averaging five runs a game. The Dolphins have struggled with batting average, however, only batting .237 as a team. Infielders Sam Armstrong (junior) and Angel Camacho (sophomore) both lead the team with three runs scored.

Did you see this?? #ShakeNBake

Michael Byrne will be the Gators’ starting pitcher while senior left-handed pitcher Casey Kulina will start for the Dolphins. The game will begin tonight at 6 p.m. in Jacksonville, Florida.