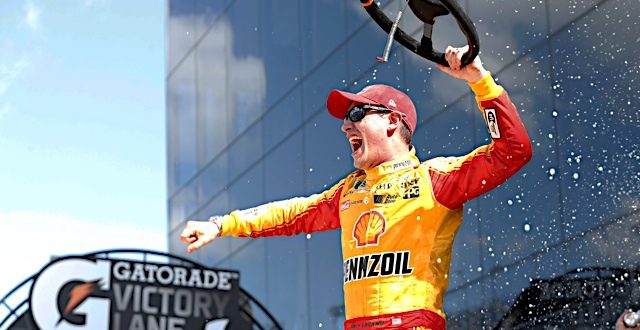 The prestigious Daytona 500 is this Sunday, February 26th, and American Joey Logano will be there in his #22 Shell/ Pennzoil sponsored Ford Fusion. Logano won the Daytona 500 back in 2015, and was the second youngest racer to ever win the event, at 24 years old. Joey is currently ranked 2nd in the Monster Energy NASCAR Cup Series; another win at Daytona International Speedway could see Logano in the number one spot.

At just 26 years old, Joey Logano is surely working towards becoming one of NASCAR’s absolute best. Since debuting in 2008 as an 18 year old, Joey has gone from being ranked 64th in the Monster Energy NASCAR Cup Series to his current 2nd place position.

That means that almost 47% of the races he’s competed in, Joey Logano has finished in the top ten. In addition, he has also led the race in 3,787 of the 82,871 laps that he has raced in. As you can see, Joey’s statistics speak for themselves, and I wouldn’t be surprised if on Sunday he came away with the win at Daytona.

Joey Logano started off this year’s Monster Energy NASCAR Cup Series with a win in “The Clash” at Daytona. After starting in the number 9 slot, Joey’s team made two different four tire changing pit stops throughout the race, while most teams only changed two tires at a time. After his last stop, Joey’s teammates Kevin Harvick and Brad Keselowski(Team Penske) helped him make his way back up the ranks. In the last lap, with the help of Keselowski, Joey Logano was able to pass Denny Hamlin and win the race.

Joey Logano praised his team over his victory at “The Clash”:

“It’s cool to win The Clash. We came close last year and it’s really neat to be in Victory Lane. We were able to get a good enough run to work together enough to break them up and make the passes and then there at the end was kind of a mess. Everything was going really fast. I was just in the right place at the right time.”

In January of 2017, NASCAR announced that a new points format would be installed. In short, the new format would see five “playoff points” given to race wins throughout the season. Winning drivers would keep those points throughout the playoff rounds, except for the final race at Homestead.

Joey Logano on the new format:

“For some drivers, the new format changes their mentality, for me, it doesn’t change me. I raced to win those races that year like everything was on the line because that is how I’m wired. I’m wired to win whatever I’m doing… I didn’t need more reason, but I think other drivers do, so that’s good for the sport.”

The Daytona 500 can be viewed on Fox, and coverage will begin at 2 p.m.