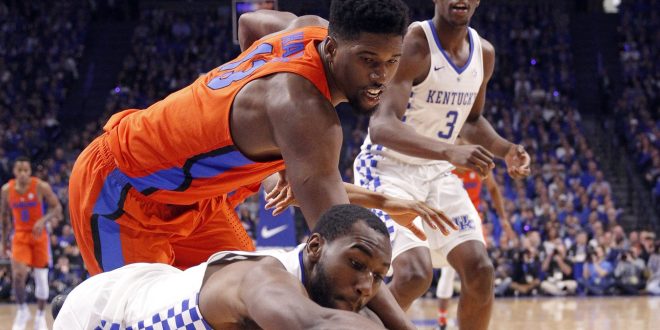 The combination of Malik Monk and Bam Adebayo were unstoppable in Kentucky’s 76-66 win over the Florida Gators in Lexington at Rupp Arena on Saturday afternoon. Monk had 33 points total and 30 in the second half alone. Adebayo finished with fifth double-double of the season, notching 18 points and 15 rebounds. The Wildcats outrebounded the Gators, 48-30, and outscored Florida by 10 in the second half.

KeVaughn Allen led Florida with 24 total points. Justin Leon ended the game with 13 points, but added only three points in the final twenty minutes. UK outshot UF, 45%-37%, from the field, and 43%-33% from downtown. The officiating was in favor of Kentucky, sending them to the foul line for 27 total shots. Florida only took six total free throws.

The Wildcats finished with 16 turnovers, but the Gators could only convert those giveaways into 13 points. Devin Robinson, after finishing the first half with 0 points, ended the contest with nine points and 11 rebounds. Canyon Barry only scored three points and Kasey Hill went 2-10 with only four points.

Kentucky just beat a potential second weekend team without De'Aaron Fox. Best win Cats have had since beating UNC in Vegas in December.

Coach Cal was forced to call a timeout with less than two minutes played in the game. The Gators started out 3-4 from the field and 2-2 from downtown. Kentucky, on the other hand, opened up 0-3 with two turnovers. Florida led 8-0 with 18:11 left in the first frame.

With seven minutes played, KeVaughn Allen continued to hit his stride. He had 11 of the Gators’ first 18 points. Florida led 18-6 at this point in the contest.

An 8-0 run for Kentucky brought the Wildcats within four points of the Gators with just under ten minutes remaining in the first twenty minutes. During that stretch, Florida missed six consecutive shots and failed to score for just about four minutes.

A 17-3 run gave Kentucky their first lead of the game with seven minutes left in the first half. A streak of Devin Robinson missed shots rendered UF’s offense stagnant.

Florida took back the lead with a three-pointer from KeVaughn Allen. With 3:36 remaining in the first frame, Allen and Leon had combined for 22 of the Gators’ 26 points.

A Devin Robinson loose ball foul with 0.6 seconds remaining sent Wenyen Gabriel to the foul line, where he sunk both free throws. Those two shots made it a tie game at halftime. KeVaughn Allen and Devin Robinson combined for 24 of Florida’s 28 first half points. No Kentucky player scored more than six points, but every player to touch the floor scored at least two.

Kentucky had 12 first half turnovers, but Florida only converted those giveaways into nine points. The Gators didn’t score in the final 2:16 of the first twenty minutes. The Wildcats missed their final eight shots of the first half, too.

With just under 16 minutes remaining in the second half, Florida had a stretch of six made shots, taking a 45-37 lead with 15:43 remaining. Devin Robinson scored nine of Florida’s 17 points to start the second frame.

Kentucky once again took the lead off of a 15-3 run. Florida went almost two and a half minutes without a basket, as their offense idled under the Wildcats’ pressure.

The Wildcats finished the game on a 17-8 run, winning the game 76-66. The Gators will have three days off before they take on the Arkansas Razorbacks in their regular season finale.