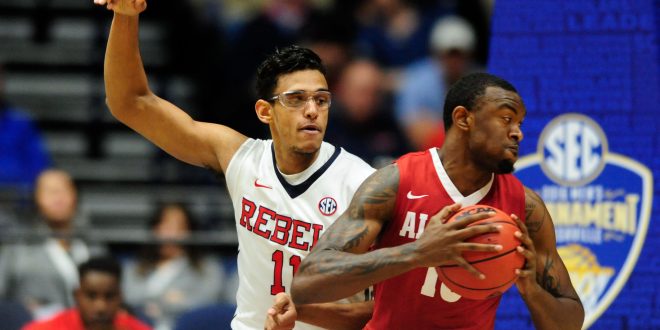 The Alabama Crimson Tide men’s basketball team will host the Ole Miss Rebels on Wednesday for senior night. Alabama and Ole Miss are tied with Vanderbilt for the No.5 seed in the league as they head into the SEC Tournament next week.

IT'S GAMEDAY BAMA NATION!! #Alabama hosts Ole Miss on Senior Night! Be in you seats 30 mins early for the ceremony! #RollTide #BuckleUp pic.twitter.com/CcJ0FzuLzO

The Crimson Tide will close out its regular season at home on Wednesday. The team will say goodbye to its seniors Jimmie Taylor, Bola Olaniyan and Corban Collins.

These two teams have a lenghty history, having played each other 177 times. Alabama has enjoyed success on the court against the Rebels, as they are tied for the second-most wins against any single opponent (119-57).

Alabama is coming off two straight losses, first to Georgia last Thursday and then to Texas A&M last Saturday. They held the Aggies to just 14 made field goals and 56 points, but the Crimson Tide offense was lackluster at best.

The Tide were led by two players who came off the bench; junior Ar’Mond Davis had 11 points while Jimmie Taylor had seven rebounds, three blocked shots, and six points.

The Rebels have won three of their last four against the Crimson Tide. Ole Miss is also one of the only two schools in the league to finish .500 or better in the SEC in each of the last six seasons.

Saturday’s win over Mizzou marked another milestone for the Rebels. #HottyToddy pic.twitter.com/dVI0sTUBRu

The team ranks third in the SEC in rebounds, pulling down 39.2 rebounds a game this year and fourth in the league with a +2.6 rebounding margin.

Alabama will travel to Knoxville to take on Tennessee on Saturday, March 4 at 12 p.m. for their final game of the regular season.

Meanwhile, Ole Miss will have their senior night on Saturday at 7:30 p.m. when they host South Carolina for their last game. Both games can be seen on the SEC Network.