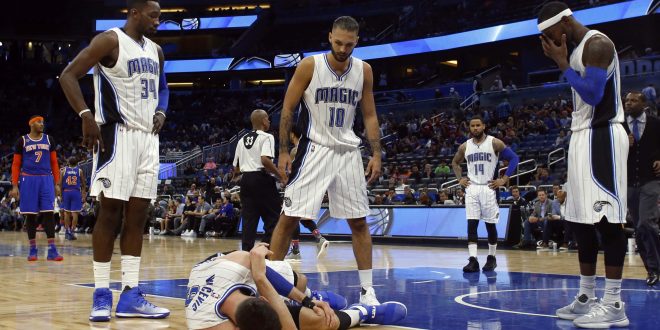 Mar 1, 2017; Orlando, FL, USA; Orlando Magic center Nikola Vucevic (9) lays on the floor holding his knee after a fall during the second half of an NBA basketball game against the New York Knicks at Amway Center. The Nicks won 101-90.Mandatory Credit: Reinhold Matay-USA TODAY Sports

The Orlando Magic have had a theme of inconsistency on the court and in the front office this season. That theme only continued after suffering another loss last night, this time to the New York Knicks by a score of 101-90 inside the Amway Center. This leaves Orlando at 3-7 in their last 10 games and 22-39 overall for the season. That is second-worst in the Eastern Conference. The fourth-worst record in the NBA, which the Magic also currently hold, indicates a possible return to the top five of the NBA Draft Lottery with 21 games to go. Will the Magic be able to avoid the same fate in the lottery they entailed between 2013-15?

My feeling about this first half… pic.twitter.com/CY8le0ZTZM

The Orlando Magic are currently simply unable to produce enough “magic” on both sides of the court to win games and return to the playoff picture. The team is the second-worst in points per game this season at 99.5, just ahead of the Dallas Mavericks. Therefore, the Magic cannot win games when their opponents are averaging almost 106 points per game. The absence of a superstar (or even an all-star) is crippling them from even making the final two or three seeds in an Eastern Conference that has not been very good in recent years. Dwight Howard was the last guy to feature in an All-Star Game for them in 2011-12.

The Magic shot 41 percent against the Knicks, which is below their 44 percent season average. Shooting below their already low averages such as their 32.8 percent from three is a difference maker. If the Magic mix an all-around all-star with a borderline all-star and role player such as Nikola Vucevic (do not forget production from the bench and decent play from the other starters), they have a better chance of being over .500 and targeting a playoff run.

First-season head coach Frank Vogel began the season with a starting lineup of Elfrid Payton, Evan Fournier, Aaron Gordon, Serge Ibaka, and Nikola Vucevic. However, mediocre play (especially on offense) led to the team starting off with a losing record and Vogel switching his lineups and rotation. Jeff Green, D.J. Augustin, and Bismack Biyombo all began to fill in, but then the defense became the problem. Both of Vogel’s roster decisions were working initially, but the team is in need of more than just temporary solutions.

The post-Dwight Howard era began as a rebuilding process filled with hope and progress, but now seems to decline as every season passes. Although the players continue to underachieve, the actions of the front office also determine the future of what this team will become. This begins with bringing in great players with defined roles.

Orlando’s executives have lost Victor Oladipo, Tobias Harris, Maurice Harkless, Kyle O’Quinn, Serge Ibaka, and more. Besides Ibaka, all the other players essentially made the Magic a team with potential, but patience grew thin over the last two seasons. The Magic got close to nothing in return for all of these players. The roster is now full of sub-par veterans with the mentality of winning now, but not enough quality. Terrence Ross, who came after Ibaka was traded to the Toronto Raptors, spoke about the state of the team last night after the loss to the Knicks.

Former fifth overall pick Mario Hezonja is on the bench instead of getting quality minutes. Additionally, the team appears to be building around Aaron Gordon, but they did not move anyone during the trade deadline. Rushing the development of players, throwing away potential talent, and bad in-game decisions are combining to halt the Magic rebuild.

For the Magic to accomplish their goal of becoming a playoff team again they must trust the process of development and change their roster to have young talent again, with the hope of them reaching their potential. A short-term plan could be ideal, but unless they get lucky they are not producing enough to be good soon. Team chemistry after reintroducing quality along with good management and coaching decisions will be the changing point for this team. When and how is the biggest question left for the franchise.