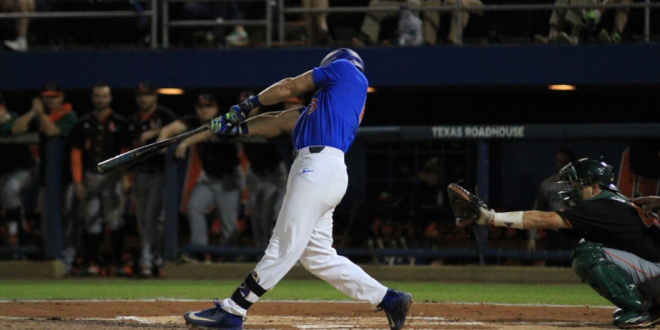 Gator Baseball Offense Shows Up In Win Over Seton Hall

The Florida baseball team had its most impressive offensive performance in a while on Friday night, finishing the game with three homers in an 8-0 win over Seton Hall.  Florida is now 11-4 on the year while the Pirates fall to 6-7.

The Gators were coming off two mid-week losses to Florida Gulf Coast with a combined five runs in the two games. The Gators proved they hit the batting cages since those losses after hitting two homers in the first two innings of the game Friday night. Both JJ Schwarz and Dalton Guthrie hit two-run homers over the left field wall to give the Gators confidence at the plate.

Schwarz took the first pitch he was given and sent it over the left-center field wall; his homer drove in Dalton Guthrie who got on base for the first hit of the game.

Guthrie’s homer tacked on two more runs in the second inning. It was hit to left field and drove in sophomore Blake Reese who got on by singling over the second baseman’s head.

In the bottom of the fifth inning, Seton Hall’s starter Shane McCarthy looked like he was gaining confidence after pitching two scoreless innings. Keenan Bell, however, would go on to hit the third home run of the game. Bell’s solo shot over the scoreboard in right field padded the Gator’s lead 5-0.

The final runs of the game would come in the seventh inning of a hit by Nelson Maldonado. Maldonado hit the ball to third baseman Joe Poduslenko who tried to make a throw from his knees to get a runner out at second base. The ball was overthrown and Keenan Bell and Jonathan India would score off this throwing error.

Pirates left on base

The Gators had two scoreless innings in the third and fourth while the Pirates got dangerously close to scoring. In the fourth inning, Rob Dadona got the first hit of the game off of Alex Faedo when he singled through to left field.  Al Molina would follow with a hit but the Pirates were unable to produce any runs in the inning. Faedo retired the next three hitters to escape unscathed.

In the sixth inning, the Pirates had the bases loaded after two singles and a walk from Faedo. The Gators got out of the jam when designated hitter Matt Toke grounded to Schwarz who flipped it Faedo for the out.

Faedo threw six scoreless innings, striking out six while scattering five hits and only walking one. He continues his scoreless inning streak that has now reached 21 2/3 innings.

Frank Rubio pitched 1 1/3 of an inning, striking out two and only allowing one hit.

Freshman lefty Andrew Baker came in to finish the eighth inning with one strikeout. Gainesville native David Lee would make his first appearance of the year in the ninth inning and he retired the side in order with two strikeouts..

The Gators will continue their weekend series with a doubleheader tomorrow beginning at 4 p.m. at McKethan Stadium.