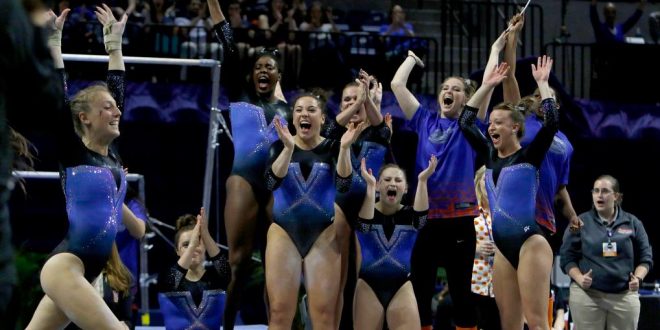 The third ranked Florida gymnastics team had its final meet of the regular season Friday night, where they defeated the No. 22 West Virginia Mountaineers 197.600-196.100 at the Exactech Arena in Gainesville. Friday night was also Senior Night where the team celebrated and said goodbye to lone senior Claire Boyce. Florida came out on top in every event of the night with top performances by Rachel Slocum, Amelia Hundley, Alex McMurtry, and Kennedy Baker. Gator coach Jenny Rowland said they treated this meet as a pre post-season meet.

Moving onto the second rotation, the Gators were onto the uneven bars. Amelia Hundley and Alex McMurtry were both top performers for this event with a tie score of 9.925. They Gators were able to keep their lead against West Virginia as they entered the third rotation with a running score of 98.800-97.850.

Florida moved onto the beam for the third rotation. Alex McMurtry was the top performer on the beam with a score of 9.950, which tied her career best! Two other Gators matched career and season highs for this event. Kennedy Baker tied her season-high of 9.875 and Amelia Hundley tied her career-high with a score of 9.900 on the beam. The Gators ended the rotation with a lead of  of 148.225-147.025 over West Virginia.

For the final rotation, the Gators had the floor and West Virginia was on the beam. Kennedy Baker was the top performer on floor and had the highest score of the night with a 9.975. This was her third 9.975 of her career on the floor.

Rachel Gowey was the All-Around winner of the night with a score of 39.275. This was Gowey’s first all-around title of her career. She said she was able to keep her energy up throughout each event.

The Gators will be heading to Jacksonville Saturday for the SEC Championships.

Sydney is a senior studying telecommunications with a specialization in sports media at the University of Florida. She is a multimedia sports reporter for ESPN 98.1 FM/850 AM WRUF and WUFT-TV.
Previous Vanderbilt Takes Down Florida For The Third Time This Season, 72-62, Ending Their SEC Tournament Early
Next Gator Baseball Offense Shows Up In Win Over Seton Hall