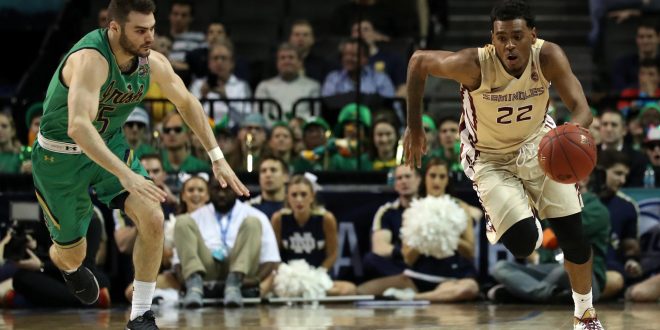 Florida State Takes on FGCU in First Round of NCAA Tournament

Two Florida teams will go head to head in the first round of the 2017 NCAA tournament, this week. Florida Gulf Coast University is set to take on Florida State University, Thursday. The Eagles earned the 14th seed in the West while the Seminoles snagged the No. 3 seed.

This is the first time FSU will appear in the NCAA tournament since 2012 when they fell to Cincinnati in the second round. Florida State’s head coach Leonard Hamilton says the Seminoles need to have the proper mindset going into this year’s tournament.

The Seminoles’ offense has been rolling lately but they enter the tournament having split their last eight contests. Coach Hamilton says his team has to be ready, no matter who they’re playing but are pleased to clinch the No. 3 seed in the West.

Florida Gulf Coast ended the regular season going 26-7 overall and 12-2 in conference play, a record for the program. The Eagles have won 19 of their last 21 games and enter the NCAA Tournament with an RPI of 85.

The Eagle’s 14th seed position is the highest in program history and is tied for the second highest by any ASUN conference team in the last 16 years.

However, FGCU is no amateur when it comes to the NCAA tournament. FGCU has won three games in its previous two appearances in the NCAA Tournament, and in 2013 became the only 15 seed to ever advance to the Sweet Sixteen.

FGCU and FSU have met once before. In 2014 the teams came head to head in the National Invitational tournament. Which ended with the Seminoles squeezing out a 58-53 win over the Eagles.

The winner of the FGCU-FSU game will play the winner of Maryland-Xavier in Orlando on Saturday. Tip off is set for 9:20 p.m. at Orlando’s Amway Center.