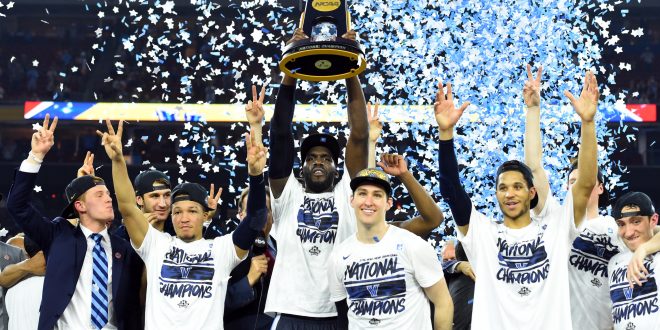 March is finally upon us and all the tickets have been punched. Reigning champ Villanova came in as the No. 1 overall seed, followed by Kansas, North Carolina and Gonzaga.

Here's your FIRST LOOK at the #FinalFour court! pic.twitter.com/qCPH0ug8ck

Arguably the toughest bracket, Jay Wright and the Villanova Wildcats are going to have to consistently bring their best in order to repeat. The Wildcats will potentially have go through Wisconsin and Virginia just to advance to the Elite Eight.

The east boasts two SEC teams in No.4 seed Florida and No.7 seed South Carolina, as well as three ACC teams in No. 2 Duke, No. 5 Virginia and No. 9 Virginia Tech.

After dropping three of their last four games, the Gators will have their plates full with a very good, yet unassuming East Tennessee State. Led by senior guard T.J. Cromer (19.1 ppg), the Buccaneers will try to advance to the round of 32 in their first appearance in the NCAA Tournament since 2010.

Already being dubbed “the glamour bracket”, the south is full of big-name teams, along with some sleepers, that seems to be the perfect formula for some exciting games.

In a region lined by big-name teams such as UNC, UCLA and Kentucky, it is teams like No. 4 seed Butler and No. 10 seed Wichita State that will look to shake things up.

One of the more intriguing teams in the tournament is the Butler Bulldogs.

Inconsistency has been the story of the season for the Butler Bulldogs. After knocking down Villanova twice, Arizona and Cincinnati, questionable losses to Indiana State, St. Johns and Georgetown make it difficult to predict how far the Bulldogs will advance.

Wichita State is another team in this bracket that will have the chance to shake things up. Thirteen of the last fourteen national champions have finished in the top 20 of kenpom.com’s offensive and defensive efficiency ratings.

Wichita State ranks eighth on the list of offensive and defensive efficiency ratings, which may suggest some bracket busting wins in their future.

In a bracket full of high-powered offenses, Kansas landed the top seed in the tournament for the seventh time in the last 11 season.

Led by Naismith semifinalist Frank Mason, the 28-4 Jayhawks will look to put their Big 12 tournament loss to TCU behind them as they prepare to take on the winner of Wednesday’s First Four game between North Carolina Central and UC Davis.

After losing starting center Chris Boucher to a torn ACL, Oregon will have to dig deep if they want to advance into the tournament without their best rim protector.

Boucher was a vital part of Oregon’s offense throughout the season as a guy who stretched the floor for the Ducks with his ability to knockdown threes.

Headlined by 32-1 Gonzaga, the west region has an interesting group of sleepers to keep up with.

With key wins over Arizona, Iowa State and Florida, Gonzaga’s mix of efficient offense and defense sets them up to make a run deep in the tournament.

A young, but very talented FSU team had a few questionable performances on the road this year that may indicate a potential upset brewing.

FGCU is making their third tournament appearance in five years, going back to their Sweet 16 run in 2013. Led by UCF transfer Brandon Goodwin (18.2 ppg), the Eagles will look to make a run that shocks the world, once again.

The NCAA Tournament begins on Tuesday with the two of the play-in games as Wake Forest takes on Kansas State and Mt. St. Mary’s faces New Orleans.