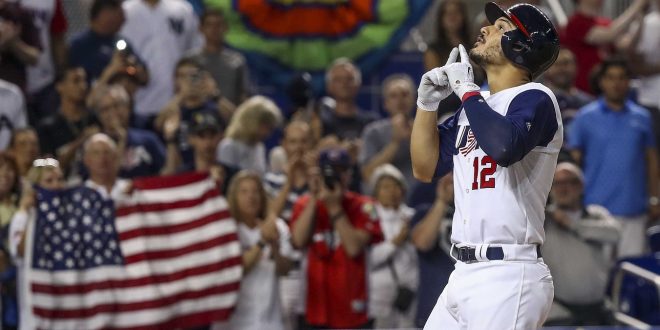 With elimination looming near, Team USA entered Sunday desperately needing a win against Canada. After a devastating loss against the Dominican Republic on Saturday, only two options remained: win or go home. Luckily, the Americans took care of business and will advance to the second round of the World Baseball Classic.

In their match up against Canada, the USA jumped out to a hot start. Putting up three runs in first inning, the team started the game with an early 3-0 lead. Then, thanks to a three-run homer by Nolan Arenado, the Americans took a controlling 7-0 lead in the second.

While the offense was certainly on fire, the pitching was just as spectacular. Starting pitcher Danny Duffy led the way for Team USA, striking out seven batters in just four innings of work. The American pitchers would combine to strikeout 15 batters in total, tying a World Baseball Classic single-game record.

Dominating on both sides of the field, the Americans would take the game by a final score of 8-0. With the win, the USA has advanced to the second round of the tournament for the fourth-consecutive time. On the contrary, Canada leaves the tournament winless and has yet to make a second-round appearance in the World Baseball Classic.

Playing each of their first-round games on the East coast, the Americans will now head West to San Diego for the second round. The team is set to face the Pool D runner-up on Wednesday at 9 p.m. ET. Venezuela and Italy will battle each other on Monday night to determine which team will advance to face the United States.

The Americans currently sit at an all-time record of 12-11 in the World Baseball Classic. In their three previous appearances, the team has never advanced to the final round of the tournament. The Americans will look to change that in the coming weeks.

Matthew is currently a senior, majoring in telecommunications with a minor in business administration.
@matt_levay
Previous NCAA Tournament Preview
Next Miami Heat Fall to Pacers and Fall in East Standings