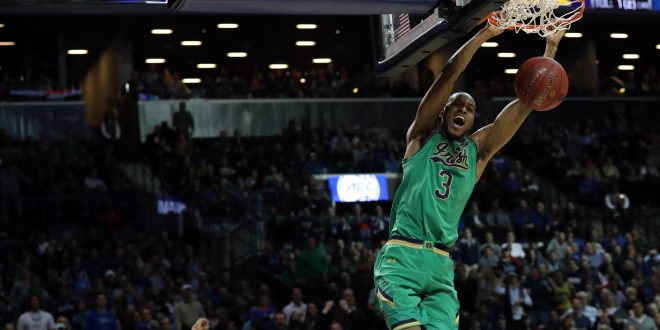 No. 5 Notre Dame (25-9, 12-6 ACC) and No. 12 Princeton (23-6, 14-0 Ivy league) are kicking off March Madness in a West region battle from Buffalo, New York. Junior forward Bonzi Colson will lead the NCAA Tournament experienced Fighting Irish against the veteran-filled Tigers and sophomore guard Devin Cannady. The last meeting between the two teams was in 1977 at Princeton when the Tigers edged Notre Dame 76-62.

Notre Dame is ranked No. 22 and Princeton No. 54 according to the ESPN College Basketball Power Index. The Fighting Irish are entering their 36 NCAA Tournament compared to the Tigers 24 appearances.

Notre Dame are entering the NCAA Tournament with confidence that they can replicate reaching at least the Elite Eight for the third straight season. Head coach Mike Brey is looking to forget his team’s recent ACC Conference Tournament Final loss to Duke in Brooklyn.

The Fighting Irish won eight of their last 10 games (losses against higher ranked Louisville and Duke). Notre Dame beat Florida State twice and Virginia once in that span, which is impressive after losing in both opening meetings. The Tigers were riding a four game losing streak before the last 10 games, therefore, they are peaking at a great time. They are ranked 15th in the nation in offensive efficiency (1.120), but only 125th in defensive efficiency (0.994). Princeton have been superior defensively, but does the 12 ACC wins make up for the Irish’s defensive struggle?

The Tigers defeated previous champion Yale in the Ivy League Conference Tournament Final 71-59 to complete a perfect season in conference play. The undefeated streak of 14 wins in the conference are magnificent, but none of the teams they have faced are of the same quality as Notre Dame. Mike Brey made jokes about Princeton head coach Mitch Henderson’s health because of the Tigers great performances this season.

Does the Tigers resume have enough to upset the Fighting Irish? Princeton play at a slower tempo that illustrates their discipline and composure (especially on the defensive end). They are ranked 46th in three-point percentage (38.1%), 139th in field goal percentage (44.7%), and 72th in free throw percentage (73.6%). All these offensive statistics are ranked lower than the Irish even when they play in non-power five conference. The Tigers average little second chance points because of the lack of offensive rebounds, but rank ninth in protecting the rim (50%). Princeton can stop Notre Dame from scoring in the paint and in transition, but what about the three-point line and their top ranked free throw percentage (79.9%)?

Princeton are a good team, but they will need to have their best game of the season to overcome Notre Dame.

Advancing to the second round will mean either playing No. 4 West Virginia or No. 13 Bucknell. The Mountaineers are likely to advance because of their superior backcourt and their agitating press defense, but the perimeter shooting and size of Bucknell can be an issue. West Virginia (26-8) finished 12-6 in the Big 12 while Bucknell (26-8) finished 15-3, winning the Patriot League title. The Bison is one of the few teams to win both their regular season title and conference title, unlike Kansas in the Big 12. Princeton beat Bucknell 72-70 in the early stage of the regular season.