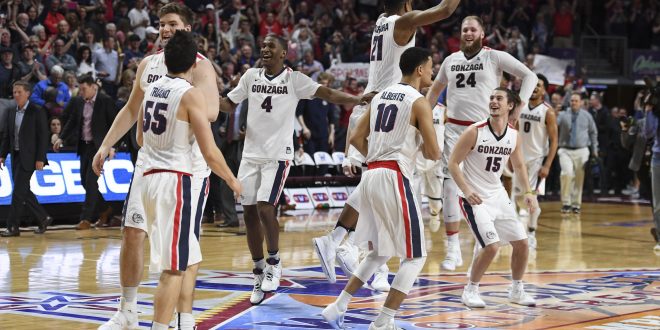 The Gonzaga Bulldogs were selected number one overall in the West region and will face the 16-seed South Dakota State Jackrabbits.

The Bulldogs have an overall record of 32-1 with their only loss being to BYU.

Nigel Williams-Goss is standing out for the team leading the Bulldogs in points, assists, steals, and is second in rebounds.

Leading the team in rebounds is Przemek Karnowski who is also one of their top blockers and is second in points. As a team, the Bulldogs score an average of 84.6 points, grab 40.3 rebounds, and dish 16 assists per game.

"And just being there on top, that says a lot about our program and what this program is all about. It's about winning." @PKarnowski pic.twitter.com/vuFzIqUpTT

For the Jackrabbits, they went 18-16 overall and finished on a six game win streak.

Mike Daum is leading the team in points and rebounds while being second in blocks. Reed Tellinghulsen is the top blocker and is also second in steals and points. The leader in assists for the team is Tevin King.

Tip-off for the game is set at 2PM on March 16 and will be played at the Vivint Smart Home Arena in Salt Lake City, Utah.