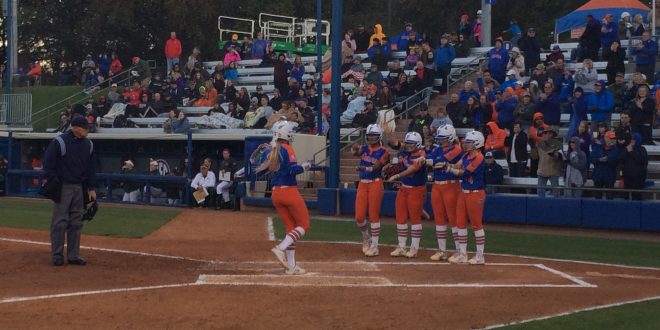 Junior Aleshia Ocasio started for the Gators on the mound and earned her fourth win of the season. She split the game with freshman Katie Chronister to record the 16th shutout for Florida this year.

The offense was clicking on all cylinders for Florida against NDSU. Their opposing pitcher was Jacquelyn Sertic. She came into the game with the second most strikeouts (145) in the country. The Gator hitters, however, were ready for Sertic and were aggressive from the first pitch.

The Florida offense got a hit in each inning, but it wasn’t until the second inning that the Gators got on the board. After Nicole DeWitt and Justine McLean were both hit by pitches to lead off the inning, Chelsea Herndon hit a ground ball down the right field line. Both DeWitt and McLean scored and Herndon earned a double.

DeWitt added to the Gator lead in the third inning with a double of her own that scored Katie Chronister, who was pinch running for Kayli Kvistad. Chronister would then enter the game on the mound to replace Aleshia Ocasio.

Running Away With It

The scoring really opened up in the bottom of the fourth inning when the Gators scored ten runs on nine hits. Sertic would leave the game after Janell Wheaton hit a grand slam to bring the Florida lead to 7-0. The hits just kept coming as they put their offense into acceleration. The next six batters got on base including a three run home run from Herndon. In the same inning as the grand slam, Wheaton recorded the final RBI of the night as she hit an infield single to score Jacqui Switzer.

Herndon and Wheaton both recorded 5 RBI and went 6 for 7 in the game. Amanda Lorenz (42), Sophia Reynoso (22) and Kvistad (23) each extended their on-base streaks in the game. Lorenz and Kvistad have reached base in every game this season. Herndon, who has been in and out of the lineup this year, said the team is really working well together as they get more comfortable with their roles.

The Gators will be on the road for their next contest as they continue SEC play. They will be in Columbia, South Carolina to take on the Gamecocks for a three game series starting Friday night at 7 p.m.