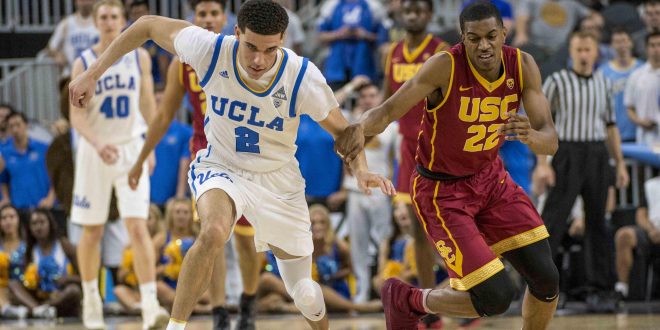 UCLA Hopeful for a Tourney Run

The UCLA Bruins (29-4) is arguably the team with the most buzz in the tournament despite being a three seed. Though, that is to be expected when you have a top three prospect on your team in the form of fab freshman Lonzo Ball.  The UCLA Bruins are playing in the South Region starting their tournament run later tonight against Kent St.

To say UCLA’s offense is good is quite the understatement. The Bruins not only lead the NCAA in scoring per game (90), but also in assists per game (21.6). What this means is the Bruins aren’t just a one man show it is a team effort as every player on the team is capable of scoring .

This allows their offense to succeed as it forces the other team to guard every player on the floor, opening many attacking lanes to exploit. This alone allows UCLA’s offense to be the most efficient in the NCAA.

Ball has received a lot of attention from the media for the past couple of weeks and for good reason, he’s a special talent. Ball isn’t your stereotypical superstar that main feature is just shooting light’s out as everything just seems to drop for him. Even if that is an aspect of his game averaging 14.6 points a game, shooting 54.4% from the field. He is very capable at spreading the ball around averaging 7.7 assists per game. These stats alone are very impressive for a guard but then you add on the fact he is averaging 6.1 rebounds per game. His game literally covers all aspects and makes him a dangerous opponent.

The only weakness that the Bruins have is their miserable defense.  That is what has gotten them into trouble as their opponents averages 75.3 ppg, 255th in the nation.

"One town, one team, one goal…" Good luck tonight @KentStMBB, in the first round of the NCAA Tournament! #GoFlashes #Unleash #MarchMadness pic.twitter.com/emrKobP6Wk

The Kent St Golden Flashes would like nothing more than to upset UCLA. The Golden Flashes have a dynamic duo that potentially could cause the Bruins some trouble. They have sophomore guard Jalin Walker, MAC Tournament MVP, who is capable of going off as he put up 30 points in a 70-65 victory over Akron in the championship game.

Senior Forward Jimmy Halls is a formidable threat averaging 18.9 points and 10.5 rebounds a game. He could be a handful but will it be enough for the Golden Flashes to have their shining moment by pulling off an upset.

The UCLA Bruins will kick-off their journey in the NCAA tournament tonight at 9:57 ET on TRUTV.  This is the Bruins 47th trip to the NCAA Tourney and they will be hopeful to win their 12th national championship and the first since 1995. 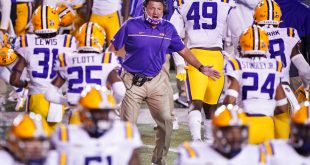 LSU Football Opens Up Season With Matchup Against UCLA