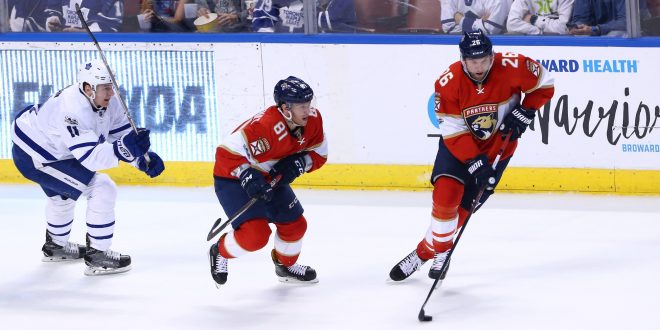 Tonight the Florida Panthers will be in Madison Square Garden to take on the Rangers (44-24-2).

The Rangers have not won a home ice match since February 19. As a result, they have lost five straight home victories in a row. Rangers alternative captain Derek Stepan said, ” We all strive to play the same game, home and away, but the results have not been there the way we’d like at home.”

Rangers recently loss to the Tampa Bay Lightning on Monday. New York sits in fourth place in the Metropolitan Division and is comfortably in the top wild card spot in the Eastern Conference.

"We just have to stick to the details that make us a good team." – @BradySkjei before #NYR host Florida tonight. pic.twitter.com/vYhXxh6KOe

The Panthers are the second in the league on penalty kills. They have allowed only two power play goals in their last 13 games. Friday’s contest against the Rangers, the Panthers enter on the fringe of the playoff race in the East.  Just 1-5-1 in their last seven games and 2-8-1 since sweeping a five-game road trip to re-enter the battle for postseason.

Thursday night, the Panthers grabbed a 1-0 lead on the road in Columbus, but then eventually dropped 2-1 in the final to the Blue Jackets. This was a huge hit. Florida is now seven points behind Toronto for the second wild-card spot in the East with 13 games remaining. It also resulted in the end of the five game winning streak.

Panther’s interim coach Tom Rowe said, “This is a tough loss emotionally; but this how you become a better team when you go through these experiences.” Keiith Yandle, Panthers defensive men, is upset about the loss but the team really needs to give it their all in these final games.

Hear from Yandle, Barkov and Rowe after tonight's loss. pic.twitter.com/NgLE0uYn0Q

Florida remains without one of its top defense men, Aaron Ekblad, who has an upper- body injury and No.1 goaltender Roberto Luongo, who has a lower body injury.

Friday’s game will be the third and final one played between the Rangers and the Panthers this season. The Rangers skated to a 5-2 victory 10 days ago over Florida, while the Panthers beat the Rangers 3-2 back in November.

This game will be a battle. Yandle said, “We’re going to fight until the end.”

The game starts at 7 pm in Madison Square Gardens on FOX Sports Florida.

Hello my name is Kaitlin Alexander, a passionate story teller and lover of sports. Fun facts about me: I am a world traveler, interviewed all three UF Heisman Trophy winners, and a former intern of Bleacher Report. Follow me on Twitter: KalexanderUF
@KalexanderUF
Previous NCAA Tournament Preview: Louisville vs. Jacksonville State
Next UCLA Hopeful for a Tourney Run