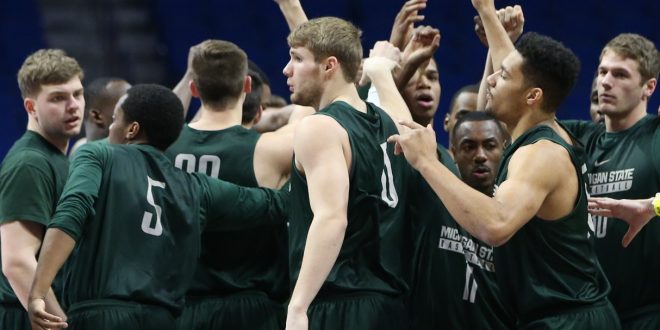 Embrace the madness as the NCAA tournament is officially underway. In first round action the No. 8 Miami Hurricanes face off against Tom Izzo and the No. 9 ranked Michigan State Spartans.

However, this is one of the lowest ranked teams coached by Tom Izzo entering the NCAA tournament. Coached by Jim Larrañaga this will be Miami’s 9th trip overall to the tournament. Both basketball teams struggled with a 1-3 finish entering the tournament. This is just the second meeting between Michigan State and Miami. Miami won the first match up 67-59 in the ACC/Big Ten Challenge back in 2012.

The Spartans are averaging 71.7 points a game and only allow 68.4 points a game. Freshman guard Miles Bridges leads the Spartans with an average of 16.7 points per game on 48% shooting and 8.3 rebounds per game and will be a key player in tonight’s match up with the Hurricanes.

Freshman guard Nick Ward will play an important role as well as he’s putting up 13.7 points per game and 6.5 rebounds per game. Freshman guard Cassius Winston leads the team in assists with an average of 5.1 per game and will look to contribute as well.

Junior guard Ja’Quan Newton will play an important role as well as he averages 13.4 points per game and leads the team in assist with an average of 3.4 assist per game. Bruce Brown who averages 11.9 points per game on 45% shooting and averages 5.8 rebounds a game will be a major factor as well for the Canes going into this match up.

It's gameday! MSU takes on Miami (Fla.) in the First Round of the NCAA Tournament at 9:20 p.m. on TNT. #marchmadness #SpartanMentality pic.twitter.com/t48gM1dK6O