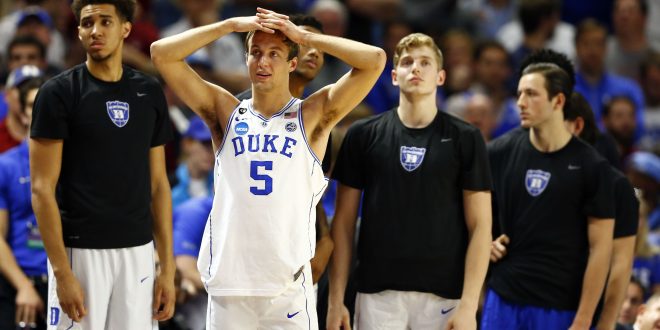 Mar 19, 2017; Greenville, SC, USA; Duke Blue Devils guard Luke Kennard (5) reacts on the bench during the second half against the South Carolina Gamecocks in the second round of the 2017 NCAA Tournament at Bon Secours Wellness Arena. Mandatory Credit: Jeremy Brevard-USA TODAY Sports

NCAA Tournament Round of 32 Recap

It was a wild weekend for many top-seeded teams in the NCAA Tournament as No. 1 overall seed Villanova and No. 2 seeds Duke and Louisville were bounced in the round of 32.

Many other top seeds were tested as well. Barring Kansas’ 20 point victory over Michigan State, the average margin of victory for No. 1 and 2 seeds was just 4.3 points.

The #Sweet16 is set! #MarchMadness pic.twitter.com/7Kle0wOQwz

With a 58-point combined margin of victory in their first two games of the tournament, Bill Self’s Kansas squad appears to be steadily gaining momentum as the tournament progresses.

Great games from Frank Mason (20 pts) and Josh Jackson (23 pts) were to be expected, but back-to-back double-doubles from Landen Lucas have given Kansas a little extra spark throughout the tournament.

Despite the large margin of victory, Bill Self felt that his players were trying too hard at times. The Jayhawks kicked it into gear late in the second half, ending the game on a 36-17 run.

Kansas will now head to Kansas City to face Purdue in the Sweet Sixteen.

After their ACC Tournament championship, many fans and analysts alike picked Duke to run the table in the NCAA Tournament.  2.3 million on ESPN’s Tournament Challenge, to be exact.

This did not faze the Gamecocks, though.

After shooting 20 percent in the first half, South Carolina came out firing on all cylinders in the second half.

The Gamecocks scored a whopping 65 points in the second half, shooting 70 percent from the floor.

South Carolina went off in the 2nd half vs. Duke. pic.twitter.com/AmLvXvNDeC

Frank Martin had nothing but high praise for Duke and Mike Krzyzewski, citing that Coach K was the inspiration behind Martin pursuing a career has a full-time head coach.

Both Kentucky and UCLA stayed alive in the round of 32 and now will be face each other for the second time this season.

All eyes will be on freshman Lonzo Ball after two solid outings to start off the tournament. Ball is averaging 16 points, 5.5 rebounds and 6 assists through two tournament games.

The Wildcats and Bruins will square off in Madison Square Garden on Friday night with tip-off set for 9:39 p.m.