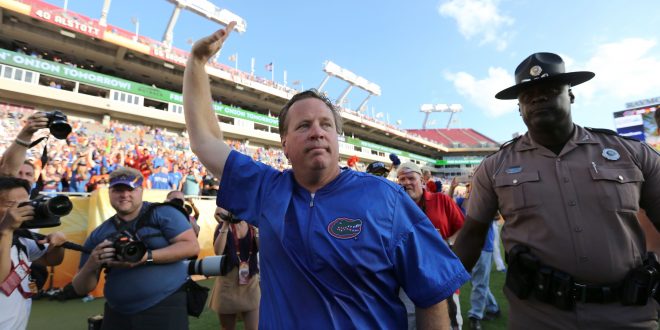 The Florida Gator Football team entered their third week of spring camp on Monday and head coach Jim McElwain says he is pleased with the level of effort thus far. Saturday’s practice was beneficial for the team for multiple reasons.

Without David Reese at the linebacker group, there are guys taking different reps. Jeremiah Moon has showed up and is proving to be a big factor in camp. He is expected to receive a redshirt for missing a majority of last season with an injury.

Kemore Gamble, a 4-star tight end, and Kadeem Telfort, a 4-star offensive tackle, have taken full advantage of their early start with the team during their first spring camp. Gamble has made a favorable impression. He has been praised for his natural football instinct and looks like an intriguing addition to the tight end role.

McElwain says Gamble is hungry, gives the team versatility and is going to make a name for himself.

Veterans C’yontai Lewis and DeAndre Goolsby are in front of Gamble, but he should be able to compete for playing time if he continues to play at this level of intensity.

McElwain is particularly excited about the offensive position groups’ progression. At this point in camp, he says the running back group has arguably been the most competitive.

McElwain says the guys have been developing and pushing each other at the RB position.

Tyler Jordan and Brett Heggie are taking reps behind starting center T.J. McCoy. McElwain says it is important to create depth in the inside three.

During Monday’s press conference, McElwain confirmed redshirt freshman lineman Brandon Sandifer, who played as a reserve in two games last season, is no longer with the team.

The Gators have speed and quickness in the wide receiver position. McElwain says the guys have to learn how to create space, understand zones and figure out a way to get open.

Receiver Dre Massey appears fully recovered from the ACL surgery he underwent last season after getting hurt on the opening kickoff. Massey has not participated in any contact work this spring, but he has been going through other drills and according to McElwain, he has not lost any speed.

Offensive lineman Kevaris Harkless is still out with a leg injury and walk-on Nick Villano has a high ankle sprain. McElwain says he could be expected back midway through the season next year.

Quarterback Luke Del Rio continues to recover from shoulder surgery. He has been at practice talking to the guys. He has been learning to do things left-handed since he is in a right-handed sling.

New Guys in Defensive Back Position

There is a batch of new guys coming in this summer and they have to learn fast.

McElwain says the defensive back spot is earned on this campus and they have a lot to live up to.