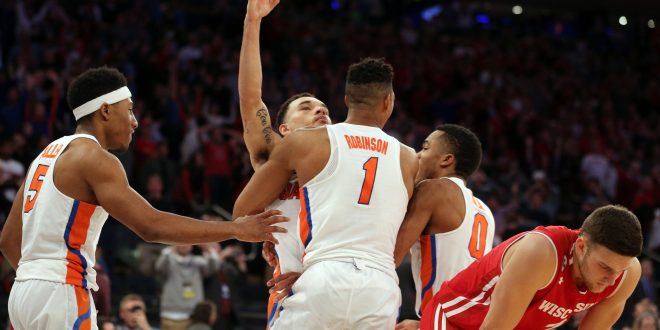 In a rare occurrence, the Florida Gators will face a team in the Elite 8 that they’ve already squared off against twice. If you predicted a South Carolina-Florida Regional Final, I’d like to know your thoughts on lottery numbers and stocks. On Sunday afternoon at 2:20 p.m., UF and SCAR will meet at Madison Square Garden. An arena that’s at least 700 miles away from each school will be packed with black and garnet and orange and blue.

This is the first time in program history that the Gamecocks have reached the Elite 8. For Florida, it’s the fifth time in seven years that they’ve made it this far in the post-season, which ties North Carolina for the most Elite 8 appearances since 2006 at seven. Each team won a home game in the season series, but the Gators won the most recent match-up, 81-66, in Gainesville.

This will also mark the first time since 1986 that three SEC teams have made the Elite 8 (LSU, Kentucky, Auburn).

Frank Martin has now taken both South Carolina and Kansas State to the Elite Eight. Has made college basketball elite at two FB schools.

While South Carolina boats an elite defense, allowing 64.8 points per game, which ranks 30th in the nation, it has lately been their offense which has propelled them to victory. The Gamecocks are averaging 73.1 points per game this season, but in the NCAA Tournament have scored 83.7 points per contest. They’re allowing 68 points per game, which is higher than their season average, but gave up only 50 points in a 20-point blowout win over Baylor in the Sweet 16 in New York City.

South Carolina’s victory on Friday night vs. the Bears was more similar to their style of play than their first two games. SCAR held Baylor to 30.4% shooting from the field, 23.1% shooting from beyond the arc and forced 16 turnovers. Besides Johnathan Motley, who notched 18 points, no other Baylor player scored more than nine points on Friday evening.

It Starts With Sindarius

Sindarius Thornwell, the SEC Player of the Year, is averaging 25.7 points per game in the post-season, while shooting 46.8% from the floor and 45.5% from downtown. He’s also recording 2 steals and 7.7 rebounds per contest in the NCAA Tournament. Thornwell is averaging 35 minutes per game in the big dance and will need to stay on par with that if South Carolina wants to take down Florida for their first ever trip to the Final Four.

Chris Silva was a non-factor for the Gamecocks last season, averaging 5.4 points and 4.5 rebounds in an average of 13.3 minutes played per game. This season, he’s been the x-factor for SCAR. In the NCAA Tournament, Silva, the sophomore from Gabon, is notching 13 points, 7.3 rebounds, 1.3 blocks and only 1 turnover per game. He’s also improved his free throw shooting exponentially, and is shooting 13.5% higher from the charity stripe in the NCAA Tournament than his season average.

Florida struggled to contain Ethan Happ and Nigel Hayes on Friday night, and might’ve lost the game had Happ not gotten in foul trouble early in the second half. The Gators will benefit from the fact that Silva is averaging 3.8 fouls per game on the season and 3.7 per game in the post-season, but that won’t take away from the fact that when he goes off, South Carolina plays better as a whole.

What Did Florida Do Right vs. Wisconsin?

There are two major factors I saw that led the Gators to victory on Friday night. First, it was Florida’s full-court press and defensive identity. UF forced 16 turnovers, leading to 20 points against a team that committed the 26th-fewest turnovers in the country coming into the Sweet 16. Once the press was turned on, the Gators turned defense into offense, and got into a good grove.

The second portion of the equation was the return of KeVaughn Allen. Allen started the tournament 5-31 from the floor, and couldn’t hit the broadside of a barn. After the rough start, KeVaughn went on to score 35 points against Wisconsin, with a lot of his success coming from the charity stripe. Allen went 9-10 at the free throw line, and would’ve been perfect, had he not missed his last attempt. When KeVaughn Allen plays well, the offense flourishes and looks like it did when the Gators won nine straight games during their SEC schedule.

What Can Florida Improve?

While KeVaughn Allen went 9-10 from the charity stripe, the Gators can improve their free throw shooting as a whole. They shot 71% from the charity stripe against Wisconsin, but will need to do better against South Carolina. Many coaches have described playing the Gamecocks as similar, in terms of physicality, to playing a football game. Florida will have many chances at the foul line on Sunday afternoon and will need to convert.

While Canyon Barry did have a game-saving block at the end of overtime, he must improve his output on the offensive end. No other player besides Allen scored more than eight points on Friday night. Barry was the sixth-man of the year in the SEC for a reason, and has provided valuable scoring off of the bench so many times this season. Not only must his scoring improve, but he must get more efficient on the glass in the post-season, something he was so good at this season.

Friday afternoon’s game tips-off at 2:20 p.m. at Madison Square Garden and will have no chance of being delayed as it is the first game of the day at MSG. You can catch the game on CBS with Verne Lundquist and Jim Spanarkel on the call. You can listen to the game locally, as always, on the Gator IMG Sports Network with Mick Hubert, or nationally on Westwood One with Ian Eagle.

Florida-South Carolina may only be Elite 8, but it’s for the…

Previous Gators Clinch Series Win over LSU
Next Second Half Woes vs. South Carolina End Florida’s Season in the Elite 8