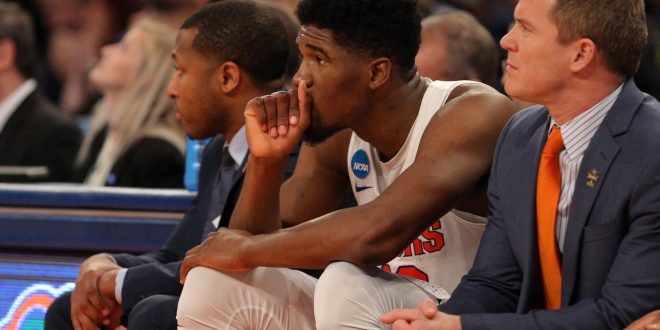 Mar 26, 2017; New York, NY, USA; Florida Gators forward Kevarrius Hayes (13) reacts on the bench during the second half against the South Carolina Gamecocks in the finals of the East Regional of the 2017 NCAA Tournament at Madison Square Garden. Mandatory Credit: Brad Penner-USA TODAY Sports

Second Half Woes vs. South Carolina End Florida’s Season in the Elite 8

Sunday afternoon’s game at Madison Square Garden could be summarized in five words; a tale of two halves. The Florida Gators’ season ended in the Elite 8 as they lost to the South Carolina Gamecocks, 77-70. Florida shot 7-for-12 from three-point range and held a seven-point advantage in the first half. After this remarkable shooting performance, the Gators went 0-for-14 from beyond the arc in the final twenty minutes and shot 31.4 percent from the floor.

Sindarius Thornwell was the x-factor for the Gamecocks in this one, dropping 26 points and seven rebounds on 8-for-13 shooting. He also went 9-10 from the charity stripe. Thornwell has now scored at least 24 points in each of South Carolina’s first four games in the NCAA Tournament. P.J. Dozier was lights out as well, scoring 17 points for SCAR.

South Carolina is not just a football school anymore. The Gamecocks are going to the Final Four. A masterpiece from Frank Martin at MSG.

The Gamecocks scored 42 of their 77 points in the paint and outrebounded the Gators, 34-31. South Carolina scored 20 points off of Florida’s 16 turnovers. Justin Leon led Florida with 18 points on 7-for-15 shooting while adding six rebounds. KeVaughn Allen added 13 points as well. Overall, UF shot 27 percent from long-range and 42 percent from the floor. The Gamecocks shot 49 percent from the field and 20 percent from beyond the arc.

South Carolina will advance to their first Final Four in program history, where they’ll play Gonzaga in Phoenix, Arizona. The Gamecocks ended the game on a 16-7 run and made all of their final three shots. Sindarius Thornwell (SCAR), P.J. Dozier (SCAR), KeVaughn Allen (UF), Chris Chiozza and Nigel Hayes (WIS) were all named to the 2017 All-East Regional team.

Florida’s inability to hold onto the ball limited them early in the contest. The Gators had seven turnovers in the first eight minutes and 19 seconds leading to eight points for the Gamecocks. Both teams opened the game 6-for-10 from the floor.

A Kasey Hill layup with a little less than eight minutes left in the first half tied the game up at 18. The Gators eight turnovers in the first 12 minutes led to 11 points for the Gamecocks, accounting for more than half of their total offense up to that point in the game.

Devin Robinson gave Florida the lead once again on a three-pointer from the top of the key with five minutes left in the first half. The Gators led 25-24 at that point in the contest.

UF took a seven-point lead, their largest of the game, with a minute left in the first frame. Justin Leon was unstoppable from three-point range, knocking down three of his first four attempts from long-range.

The Gators ended the half on a 20-9 run, taking a 40-33 lead into halftime. Justin Leon led Florida in first half scoring, knocking down five of his seven attempts, good for 13 points. Sindarius Thornwell led all players in scoring with 15 points on six of eight shooting.

The Gator shot 56 percent from the floor and 58 percent from three-point range, while the Gamecocks completed 47 percent of their shots and 29 percent of their attempts from beyond the arc in the first twenty minutes. SCAR forced 11 turnovers, turning the giveaways into 13 first half points. South Carolina scored 22 of their 33 points in the paint, but Florida still outrebounded the team from Columbia, 17-11, in the first frame. The Gators had nine assists on 14 makes in the first 20 minutes.

The Gamecocks opened the half on a 4-0 run, pulling within three points of the Gators in the first two and a half minutes of the final frame.

South Carolina remained within three points at the under-16 media timeout. Florida led 46-43 at this point in the game but was 3-for-8 from the field and 0-for-4 from long range to start the second half. The Gamecocks hit four of their first six shots to begin the final frame.

South Carolina took their first lead of the game since the 5:24 mark of the first half with 11:20 left to go in the contest on a Maik Kotsar put-back layup. The Gators opened up the second half 0-for-8 from downtown, after going 7-for-12 in the first 20 minutes.

Florida retook the lead once again, 55-53, but put South Carolina in the double bonus with 6:55 remaining in the game.

Sindarius Thornwell hit 21 points with just under six minutes left in the game. He’s had at least 21 points in every NCAA tournament game that South Carolina has played this season. The Gamecocks led 59-57 with 5:27 left in the contest. The Gators were 6-for-25 (25%) from the floor and 0-for-12 from beyond the arc at this point in the second half.

The game remained tied at 63 with just three minutes left to play in the East Regional final. Florida had only committed two turnovers at this point in the second half, as opposed to their 13 in the first half. Still, the Gators’ halfcourt offense continued to stagnate against South Carolina’s swallowing defense.

South Carolina took a four-point lead with under two minutes to go on a Maik Kotsar mid-range jumper. Florida pulled back within two with under a minute and a half left on a Kevarrius Hayes layup.

Florida just couldn’t finish their comeback, losing the game, 77-70, effectively ending their season in the Elite 8.