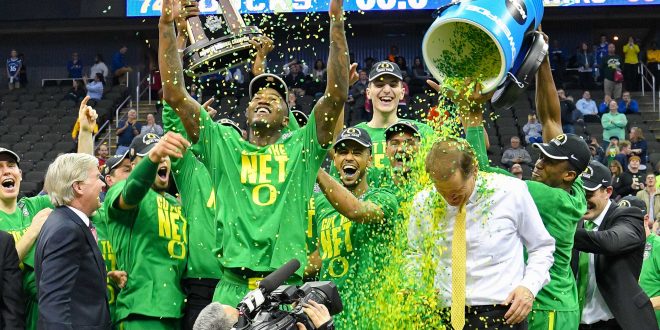 Mar 25, 2017; Kansas City, MO, USA; Oregon Ducks head coach Dana Altman is doused by confetti by his players as they celebrate with the trophy after the game against the Kansas Jayhawks in the finals of the Midwest Regional of the 2017 NCAA Tournament at Sprint Center. Oregon defeated Kansas 74-60. Mandatory Credit: Denny Medley-USA TODAY Sports

The Oregon Ducks basketball team returns to the national semifinals for the first time since 1939. In that appearance, Oregon took home the first NCAA tournament title. The Ducks have since appeared in the NCAA tournament 15 times and made it to the Elite Eight in 2016 before falling Oklahoma.

The Number 3 seed Oregon Ducks defeated top-seeded Kansas in Kansas City, Missouri to secure the program’s first Final Four Appearance since ’39. A huge accomplishment for a team that lost one of its best players, due to injury, just before the NCAA tournament. Forcing other players to step up.

Tyler Dorsey hit six 3’s and recorded 27 points, Dillon Brooks added 17 and Jordan Bell finished with 11 points, 13 rebounds and eight blocks. The Ducks secured the lead with 16 minutes left in the first and never trailed after. Beating the Jayhawks 74-60.

Head coach Dana Altman says this team is a special group of guys.

Before going to Oregon, head coach Dana Altman was the head coach at Creighton, Kansas State, and Marshal. Now after seven seasons with the Ducks and five straight tournament appearances his team has finally reached the final four.

Altman says he is proud of how far his team has come. He says they just need to continue to play well.

He says its been a long time coming but they are ready to get to Arizona and play for the title.

The Ducks will head to Phoenix, Arizona to take on North Carolina. Carolina beat Kentucky in the final seconds of their game squeezing out a 75-73 win over the Wildcats.

Oregon will play North Carolina at the University of Phoenix Stadium, in Glendale on April 1st with first tip set for 8:49 p.m.