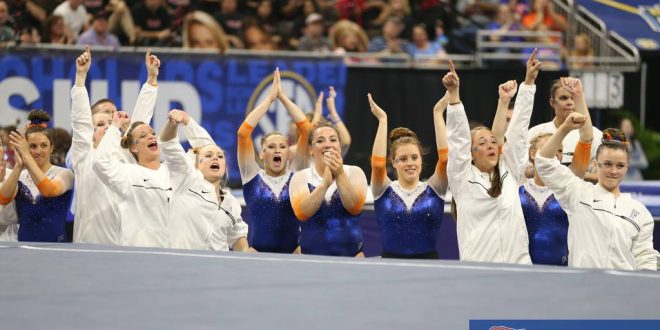 The Florida Gators gymnastic’s team continues their postseason run in Gainesville this weekend as they host the 2017 NCAA Gainesville Gymnastics Regional Championship in the Exactech Arena at the Stephen C. O’Connell Center. The meet is set to start at 4 p.m.

#NCAAGym Regional action is THIS Saturday at 4pm in @OConnellCTR

There will be six teams in attendance: the No.10 Georgia Bulldogs,  the No. 15 Missouri Tigers, the No. 33 Penn State Nittany Lions, the No. 30 New Hampshire Wildcats, the No. 35 North Carolina Tar Heels, and of course, the No. 3 Florida Gators.

The Gators are excited to be at home for this weekend’s meet. They are hoping that having the arena filled with Gator fans will give them an advantage. Junior Alex McMurtry says she is glad she doesn’t have to worry about traveling this week. Head coach Jenny Rowland says after a tough travel to Regional’s last year, she is happy the girls will be able to sleep in their own beds.

Alex McMurtry was named both the SEC Gymnast of the Year and the SEC Scholar-Athlete of the Year this season. She is the first Gator in school history and the second in SEC history to take both awards in a single season.

The top two teams and the top two all-around gymnasts (those who are not on two of the top teams) will be advancing on to the NCAA Championships on April 14-15 at the Chaifetz Arena in St. Louis, MO.
Share

Sydney is a senior studying telecommunications with a specialization in sports media at the University of Florida. She is a multimedia sports reporter for ESPN 98.1 FM/850 AM WRUF and WUFT-TV.
Previous Marlins Baseball Is Back In South Florida
Next Gator Baseball Preview: On The Road To Mizzou