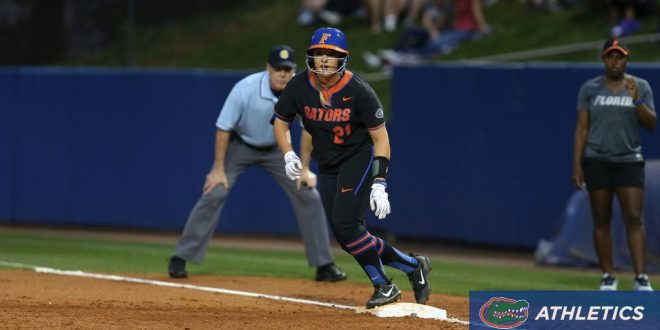 The Florida softball team completes a sweep of Arkansas on the road with a 6-1 win on Sunday.  The Gators are now 33-2 overall and 10-1 in the SEC.

FINAL | #Gators SWEEP the #Razorbacks & have posted 10+ hits in three of their last four games. pic.twitter.com/x4RWcYyhA1

Another win for sophomore Kelly Barnhill in the circle as she is now 13-0 in the season. Barnhill racked up seven strike outs in five innings of work; senior Delanie Gourley finished out the game for the Gators in the circle.

Florida fell behind in the game 1-0 in the fourth inning.  Barnhill threw wildly to first base allowing a runner to score from third but the Gators did not stay down long.  The Gators scored five runs in the fifth, helped by four extra base hits, walks and a two RBI  single from sophomore Brooke Clemens.

Sophomore Amanda Lorenz had a two-out double to right center field and was later brought home by Nicole DeWitt’s double to left field. Kayli Kvistad then homered to left field that brought home DeWitt and extended the Gator lead to 3-1; it was Kvistad’s fourth home run of the season.  The Gators would load the bases and pinch hitter Brooke Clemens came through with a single that drove home the final runs of the inning.

In the sixth inning, senior Justine McLean registered her first triple of the season and the second of her career to lead off the inning. DeWitt later brought McLean home on a single through the left side.

The Gators will take on North Florida on Wednesday in Gainesville. First pitch is set for 6 p.m. and you can watch the game on SEC Network+.