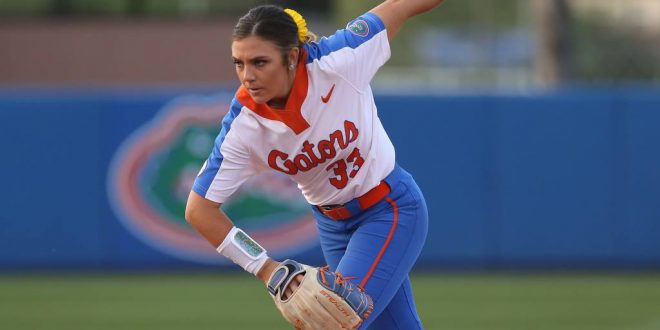 The Florida softball team got its 21st shutout of the year today against the Razorbacks in Fayetteville, defeating Arkansas 8-0 in just five innings.  At 32-2 on the season, the Gators are sitting nicely in the national rankings and in the SEC.

Delaine Gourley earned her 12th win of the season in the circle with exceptional pitching; she had six strikeouts in the game.

Gourley earns her 12th win of the season!! pic.twitter.com/7bUWcMCNoH

The Gators got three runs in the opening inning.  Kayli Kvistad singled in a run, one of her three hits on the day.  Jordan Roberts drove home another run with a sacrifice fly and the Gators got their third run on an error.  A run in the fourth scored on a Jordan Roberts sacrifice fly and then Florida put the game away in the fifth inning, the big blow a three run homer by Roberts.  Kvistad had three of Florida’s seven hits on the day.

Florida has now won 26 straight games against the Razorbacks and will look to sweep the series with a win on Sunday.   Florida will then head back home to host UNF on Wednesday.