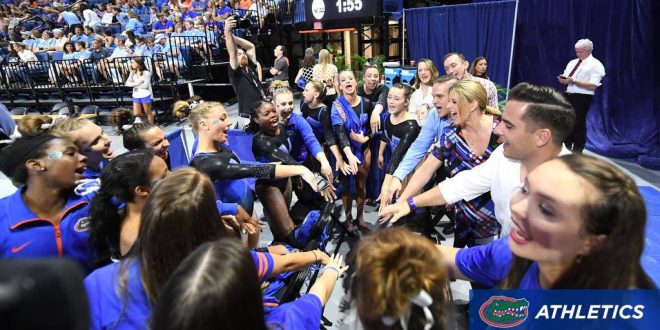 The Florida Gators Gymnastics team is heading to St. Louis for the NCAA Championship after winning the Gainesville Regional title with a score of 197.125. The Georgia Bulldogs earned second place, after they scored 196,775, and will also advance to semifinals.

During the first rotation on the uneven bars Florida struggled with a fall from Rachel Gowey that landed her a score of 9.200 and Alicia Boren tried perfecting her handstand in her routine that caused her to lose balance that resulted in a 9.425. The Gators total score on the event was a 48.975. Many concerns arose about whether or not Florida could perform after a rough start, but Head Coach Jenny Rowland had a different opinion.

Alex McMurtry won four event titles during the night, including her second consecutive all-around title. Although McMurtry has been struggling with her back, nothing has stopped her this season. Here are the events she won:

While Rachel Slocum took the title for vault with a 9.95; Kennedy Baker and Boren tied for the floor exercise title.

The top 12 teams will travel to St. Louis for the Semifinals, Friday, April 14 with two sessions being held at 1.pm. and 8 p.m. The top three teams from each session will advance to the Super Six Team Final on Saturday at 9 p.m. Selection information for the 12-team field will be available on NCAA.com at noon on April 3rd.