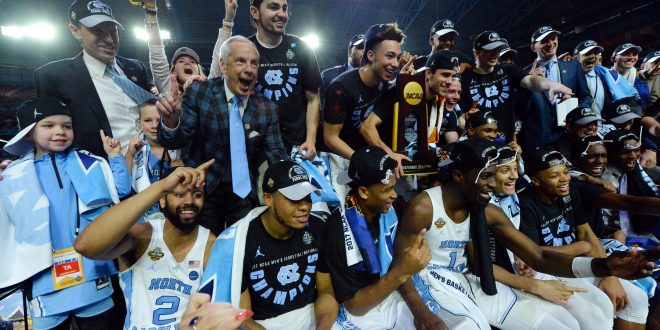 Just one year removed from being sent home at the buzzer in the National Championship, the North Carolina Tar Heels would get their revenge. One of the most heartbreaking losses in recent sports memory would be forgotten would be forgotten just after midnight. UNC would go on to defeat the Gonzaga Bulldogs 71-65 to capture the school’s sixth championship, and third under Head Coach Roy Williams. The Tar Heels returned most of the same roster from last years team, and the experience was evident during the final moments of last night’s game.

For the unaware, last night marked the first time Gonzaga had played in a National Championship game. The Zags came out strong, leading by as many as seven with just under four minutes left in the first half. Josh Perkins came out of the gates strong to pour in 13 first half points, but wouldn’t get much done from that point on. UNC would start to cut into the lead at the end of the first half, with Gonzaga taking a 35-32 lead into the break.

Here’s where a roster filled with players who have been in this position before comes in handy. The Tar Heels would start the second half on an 8-0 run forcing Gonzaga Head Coach, Mark Few, to call a timeout.

This would spark a run of their own for the Bulldogs. After going scoreless during the first three minutes of the half, Gonzaga would retake the lead after a 6-0 run. However, Gonzaga Freshman Zach Collins would pick up his fourth foul with nearly 16 minutes remaining.

The Story of the Night

From that point on, foul trouble would be the story of the game. Both teams were in the bonus with 14 minutes left in the second half. Collins would end up playing only six second half minutes before fouling out, while Przemek Karnowski picked up his fourth around the eight minute mark. The Tar Heels would experience some foul trouble of their own with Isaiah Hicks and Kennedy Meeks finishing the game with four fouls.

Despite a sloppy second half with the amount of fouls and rough shooting night from both teams, someone had to be crowned a champion. There were 11 ties and 12 lead changes during this one, but the Tar Heels would close the game on a 9-2 run, clinching another title for North Carolina. Joel Berry II would lead the way for North Carolina with 22 points, earning him the most outstanding player award. Berry had been dealing with a number of injuries throughout the tournament, but those clearly didn’t slow him down.

Looking Ahead for North Carolina and Gonzaga

It seems that North Carolina is one of the pre-season favorites to advance far in the NCAA Tournament every year. However, the Tar Heels are losing their two big men in Hicks and Kennedy Meeks and Justin Jackson is already a projected lottery pick. Besides that, their roster should remain intact with the exception of the incoming freshman.

That said, North Carolina will look to not only repeat as champions, but make it to a third straight National Championship game. With Roy Williams coaching and Joel Berry II leading the way as a senior, it should be a surprise to no one to see them back in the same position next season. And according to Coach Williams, there is no greater feeling then watching his guys hoist the trophy.

For the Bulldogs, losing Przemek Karnowski will hurt. It’s not every day that a college program has a 7-foot, 300-pound man with a finesse style of play such as Karnowski’s. On the bright side, Zach Collins has shown clear NBA talent in his freshman season, and Nigel Williams-Goss should return for his senior season. Williams-Goss was one of the premiere players in all of college basketball this year, despite some minor struggles in the NCAA Tournament.

No matter who returns for this Gonzaga ball club, it should be clear to everyone that this team means business. With this being the teams 20th appearance in the big dance and first time in the championship game, Coach Mark Few and company have officially put Gonzaga basketball on the map. But for now until this time next season, the North Carolina Tar Heels will be known as National Champions.