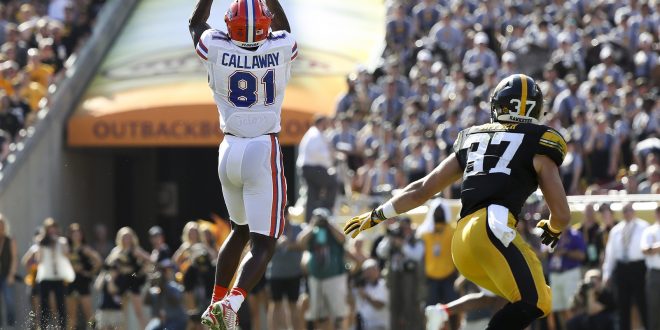 Before heading into the Orange and Blue Debut, Florida wide receivers coach Kerry Dixon II. thinks his core’s experience will shine.  In recent years, the Gator wide receivers have not been as dependable as those of the past.  However, strong spring camp performances and veteran standouts could be a glimpse into a new and improved Florida wide receiving core.

Florida has several talented young players on their roster.  Josh Hammond and Tyrie Cleveland both left their mark last season but are ready to take a more commanding role on the field this year.  During 2016, Hammond recorded 177 yards on 14 catches.  Dixon says he trusts Hammond’s skills.

Cleveland’s most memorable play was the 98-yard catch and run at LSU that ultimately sealed the SEC East title for the Gators. Dixon says Hammond and Cleveland are competitive with each other in practice.  Many of the young guys are focused on not dropping passes.  Dixon says the young players show initiative to run drills even after practice has finished.

Two Florida standouts and veteran receivers will be back this season.  In 2016, Callaway became the first player in school history to score a rushing, receiving, passing, punt return, and kickoff return touchdown in a career, joining an elite group of only 20 other players to do so.  Dixon says Callaway’s talents set him apart from even the best in the country.

However, it's just another opportunity to get better. #GoGators #WinTheNow pic.twitter.com/tRPfHOtMtY

Powell tallied 11 starts and finished second on the team with 45 receptions and 387 receiving yards.  Dixon says Powell is a quiet leader and impresses the team with his focus in practice.

The Gators are missing one young threat at practice in Freddie Swain.  Swain appeared in all 13 games last season and had two touchdowns and 118 yards on eight catches.  Dixon says Swain’s injury will hurt the team in spring, but he’s ready for Swain to show off his skill set come fall.

Junior Dre Massey will return to the slot after taking a medical redshirt last season.  Massey tore his ACL during Florida’s season opener against UMass last fall, so fans did not get to see much of his abilities.  Dixon says Massey will be an important asset to his group.

Watch the Orange and Blue Debut on Friday at 7:30 pm.