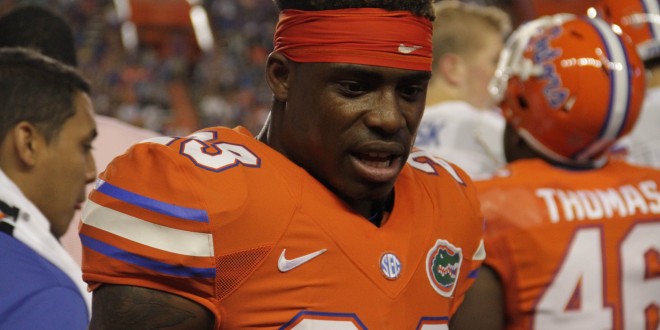 Is DBU Here to Stay in Gainesville?

The Florida Gator football program has been known to produce some of the best defensive backs in college football. From Joe Haden to Reggie Nelson to Vernon Hargreaves to Jalen Tabor; the list goes on and on. With Tabor and Quincy Wilson departing for the NFL Draft as borderline first round picks, the Gators must restock their secondary to stay near the top of college football’s DBU or Defensive Back University ranks.

The two most notable returning names from the Gator secondary are Chauncey Gardner Jr. and Duke Dawson.

Does Gardner Have Breakout Potential?

Gardner, a rising sophomore, has arguably the most hype out of any Gator heading into the 2017 season. He appeared in all 13 games as a freshman and started in the final three contests against Florida State, Alabama, and Iowa. He concluded the season with 32 tackles, three interceptions (one returned for a touchdown) and three pass break-ups. Gardner undoubtedly lived up to the hype as the fourth best cornerback in his recruiting class. He had his first career interception against Florida State. He then went on the record a career-high nine tackles against Alabama in the SEC Championship game. Gardner was named Outback Bowl MVP after recording two interceptions (one pick-six) and two tackles against Iowa in the season finale.

New Florida defensive backs coach Corey Bell has a lot of praise for the soon-to-be sophomore out of Cocoa, Florida. While Bell hasn’t confirmed where he plans on playing Gardner or Dawson, he wants to make sure everyone puts in maximum effort and buys into the system.

Leader of the Secondary

Dawson, a rising senior, finished his junior season with a team-high seven pass breakups, a pick-six, a forced fumble, 24 tackles and 3.5 tackles for loss. He thought long and hard about declaring for the NFL draft. However, after much consideration, the Cross City, Florida product decided to return for his senior season. This decision will truly solidify the Gator secondary. Dawson will also attempt to boost his draft stock with a strong final season playing in the Swamp. Dawson has the perfect opportunity to step in as a primary cornerback and be the leader of this young but talented unit.

Can Harris Make the Jump?

Bell also had very high praise for Marcell Harris, a hard-hitting safety out of Orlando, Florida. Harris, a rising redshirt senior, started eight games last season. He recorded 73 tackles, four tackles for loss, one sack, two, interceptions, one pass break-up, one QB hurry, one forced fumble and one fumble recovery. Harris won’t have Tabor or Wilson protecting the secondary anymore, so he must make the leap in order for the Gators to maintain their reputation as DBU.

Look for Dawson, Gardner, and Harris to lead a young group of defensive backs that include four-star freshmen Brad Stewart, Marco Wilson (brother of Quincy Wilson) and Shawn Davis. While the Florida Gator secondary might not be as dominant as its always been, don’t expect too much of a drop off with these three leading the way. Get ready to watch the Gator secondary take the field on Friday night at 7:30 PM in the annual Orange and Blue spring football game.