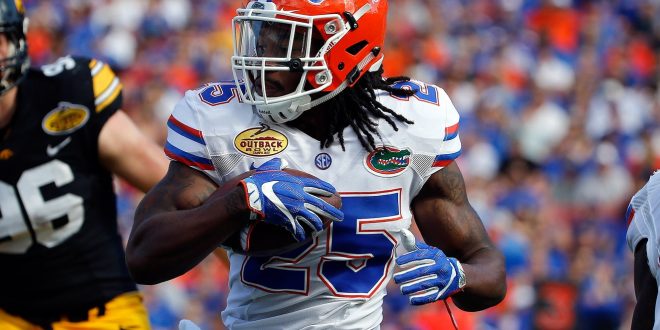 Jordan Scarlett is Leading the Gators with an “Alpha” Attitude

“I told the running back room; it starts with us. If we come out here and perform our best, you know guys are going to feed off of us. If we don’t, it’s gonna be a lot more pressure on young quarterbacks>”

Florida entered last season touting four potential backs, and all of them saw opportunities to showcase their worth.

Freshman running back Lamical Perine proved himself as a raw, coachable talent – posting an average of 4.6 yards per carry on 91 touches. Perine’s immediate impact shows why he was recruited by Alabama head coach Nick Saban. Mark Thompson was a fan favorite heading into the season, but costly fumbles resulted in less carries for the JUCO-transfer, who finished with 68 attempts and 299 yards.

Jordan Scarlett clearly set himself apart, carrying the rock more than Perine and Thompson combined. Along with 179 rushes, Scarlett reached 889 yards, six touchdowns, and managed a five yard average. Those numbers speak miles for a sophomore who entered the season with no clear role in the running back committee.

Scarlett earned every carry he got, and Seider has taken notice of his leadership during spring practices.

“Jordan had a great camp. I mean, everyday he’s getting better, you know, he’s been the alpha in the room,” Seider said of his premiere back. “He’s bringing it everyday.”

Seider explained that Scarlett “knows who he is as a running back” and said “he’s going to put his foot in the ground and go forward,” instead of trying to make multiple defenders miss.

Despite Scarlett’s impressive performance last season, Seider is being cautious not to guarantee carries for anyone.

“A fresh back is better than a tired back,” Seider reasoned. “So you always remember that as a coach, because that’s when bad things happen.”

While Scarlett has shown his potential as a workhorse for Florida, don’t be surprised to see carries being spread amongst young talent.

“I think we’re very competitive. I think we’ve got a very unselfish room, which is important, especially when you’ve got one ball.” Seider said.

Florida’s competitive nature will benefit young talents and seasoned veterans as the Gators look to earn an SEC East title for the third consecutive season. Florida’s Orange and Blue Debut will kickoff at 7:30 PM on Friday from Steve Spurrier Florida Field at Ben Hill Griffin Stadium.