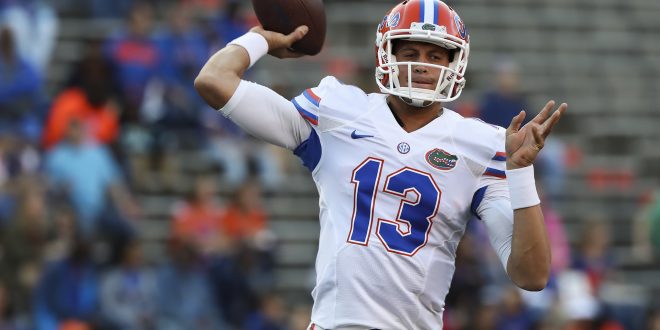 Feleipe Franks Has An Edge in Quarterback Competition

Share
Redshirt freshman quarterback Feleipe Franks made a big impression at his second go as the quarterback in the annual Orange & Blue Spring Debut. Franks went 8-for-14 for 119 yards and a touchdown. Overall, his impressive performance was what coaches and teammates wanted to see but it was his first drive that spoke the loudest. Franks threw a 46-yard pass to sophomore receiver Josh Hammond that led to a touchdown, taking an early lead in the game.

After a solid performance, head coach, Jim McElwain says Franks is ahead of the others in the ongoing quarterback battle. Also, his teammates were very supportive of the progress that have seen in Franks. Cornerback, Chauncey Gardner says Franks has improved and that he did a great job in the game.

This Year vs. Last Year

Comparing his two performances, Franks says he is now more knowledge with the playbook which has translated to more confidence in the pocket. He also adds that his first big throw was a huge confidence boost for him in the Orange & Blue game.
Looking towards the spring, Franks believes there is always something to improve on and plans on working towards getting better and sharper in the position. Franks also commented on his relationship with the other quarterback fighting for the same starting spot. He says that they all work together to help everyone be the best and will continue to do so.

Kyle Trask is right behind Franks in the QB battle. He finished 6 of 16 for 66-yards and an interception against the first-team defense. Trask says that even though he is aware that Franks is leading the competition, all he can do is focus on controlling the controllable and keep grinding. These two, as well as the entire team, will now spend these next 5 months learning from their mistakes and really honing in on their skills in each position.
Share