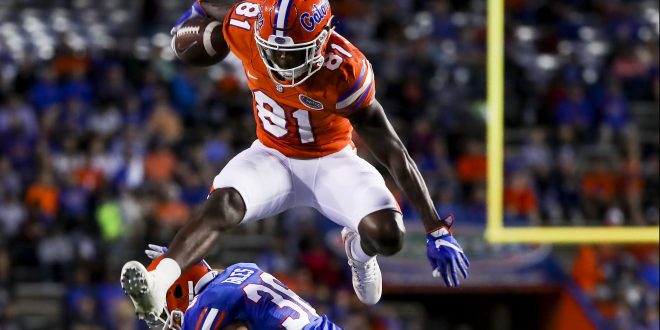 Florida welcomed over thirty recruits to the Orange and Blue Debut on Friday. This was a chance for these young athletes to see the Swamp under the lights. Coach McElwain knew how important this was for the future.

“We had some good things happen. Tonight, I think the biggest thing was getting a lot of those young guys time in the Swamp with fans” said McElwain.

Two recruits from the class of 2019 committed immediately after the game. Wide receiver John Dunmore, a 4-star from Fort Lauderdale, and corner Jashon Watkins, not ranked from Nashville, both pledged to be Gators. This tipped the scale for Florida, launching them to have the best 2019 recruiting class in the country.

One defensive talent Florida would love to snatch up is class of 2018 recruit Tyreke Johnson out of Jacksonville.

Johnson is a 5-star defensive back who is not committed to anywhere and has a total of 25 offers, which includes in-state rivals FSU and Miami. Johnson was in attendance and loved the way the Gator defense flew around the field.

On the offensive side of the ball, 4-star wide receiver Jacob Copeland from Pensacola is still undecided on where he will play at the college level. Copeland’s two top schools are Clemson and Florida.

For Gator fans worried about the offensive line there’s a potential bright spot headed your way. Offensive tackle Richard Gouraige from Tampa is a 4-star class of 2018 recruit that remains undecided, but enjoyed his visit to the Swamp.

Winning the recruiting battle in the state of Florida is a tall order, but there are many 4 and 5-star recruits that Coach McElwain and his staff can get. One date in particular jumps out for the next big recruiting wave, November 25th.

Florida State vs. Florida in the Swamp.

A big win for Florida could make up some minds for recruits. However, a Seminole win in Gainesville will continue the Jimbo Fisher recruiting success. A tale Gator fans are all too familiar with.

Originally from Ocala, Florida. University of Florida Class of 2017. Avid FIFA player willing to beat anybody. Follow me on Twitter for everything you need to know!
@JoshLaSelva
Previous The Miami Marlins Start Their Season with a 3-3 record
Next Westbrook Becomes NBA’s New Triple Double King