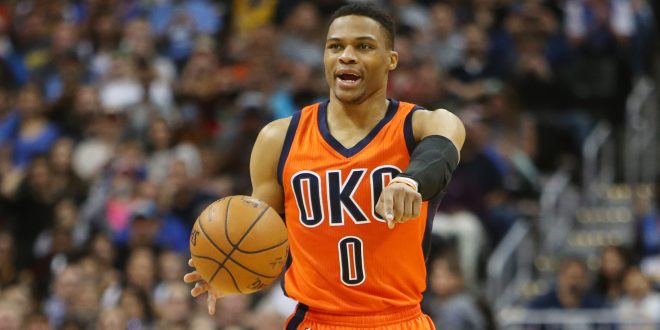 The NBA has a new triple double king. Oklahoma City Thunder guard Russell Westbrook totaled his 42nd triple double of the season Sunday night in Denver. He surpassed Oscar Robertson’s record of 42 triple doubles in a single season. Westbrook broke the 55 year old record with another amazing performance. He finished the game with 50 points, 16 rebounds, and 10 assists and hit a 36 foot three pointer at the buzzer to give the Thunder the 106-105 win over the Nuggets. After the game, Westbrook said breaking the record was something he could never dream about as a kid.

History is rewritten in Denver… as @russwest44 notches his 42nd triple-double of the season with 50pts, 16rbs & 10asts! #DEWxNBA pic.twitter.com/GkvLuKnWfD

After losing his partner in crime, Kevin Durant, in the off-season, Westbrook had to step up in a big way if the team had any chance of remaining competitive in the Western Conference. Westbrook stepped up in a historic way. He has been putting up ridiculous numbers on a nightly basis and making history in the process. During the Thunder’s game in Phoenix Friday night, Westbrook secured his spot as only the second player in history to average a triple double for the season. On Sunday, Westbrook became the all time leader in most 50 point triple doubles in NBA history with three. Westbrook’s 42 triple doubles this season catapulted him to fourth all time in career triple doubles, behind greats like Oscar Robertson, Magic Johnson, and Jason Kidd.

Westbrook, like he has done all season, has put the team on his back and willed them to victories. That was the case Sunday night. With three minutes remaining in the game Sunday, the Thunder trailed the Nuggets 105-93. In the final three minutes, Westbrook outscored the Nuggets by himself, 13-0 including the game winning three at the buzzer. Thunder fans should feel good  when Westbrook puts up a triple double this season. The reason being is that when Westbrook totals a triple double, the Thunder have a 33-9 record this season. When he doesn’t, the Thunder are 13-25.

Is Westbrook the MVP?

Throughout the NBA season, the topic of who should win the MVP award has been heavily debated across the basketball landscape. The two front-runners include Westbrook and Houston Rockets guard James Harden. Harden has put together a very remarkable season, leading the Rockets to the third seed in the Western Conference after a finishing eighth a season ago. There is no denying that Harden has made a difference for the Rockets in the win column, but no one has made more of a case for MVP than Westbrook. Setting the record for most triple doubles in a season and getting a team, who lost one of its star players, back to the playoffs is far more impressive. Sunday night’s performance should secure the MVP award for Russell Westbrook.

The Thunder will be in Minnesota Tuesday night as the Thunder face the Timberwolves at 8:00 p.m. before finishing the regular season at home Wednesday night against the Denver Nuggets. The Thunder’s playoff fate has been sealed. They have clinched the sixth seed and a playoff match-up against James Harden and the Houston Rockets.