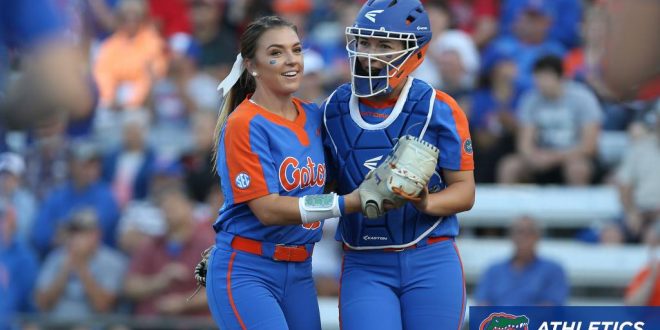 The Florida softball team clinched its ninth-straight SEC series on Sunday night against the Georgia Bulldogs with a 4-1 win. Florida is now 36-2 overall and 12-1 in the SEC.

The series is ours! Delanie Gourley had 9 strikeouts as the #Gators topped the Dawgs 4-1 Sunday night! pic.twitter.com/C1uR7pFIC5

Delanie Gourley started the game in the circle for the Gators and is now 13-2. She pitched her 10th complete game of the season, but had a rocky fifth inning and but says she learned a few things because of that.

Florida was able to jump out to an early lead as Amanda Lorenz doubled in the first inning.  Nicole DeWitt grounded out to second base to push Lorenz to third and Kayli Kvistad had her second sacrifice fly of the season to score Lorenz.

In the bottom of the second the Gators scored again.  With one out, Jaimie Hoover walked but was erased on a fielder’s choice by Janell Wheaton.  Justine McLean singled through the left side and Sophia Reynoso singled to play Wheaton to make it 2-0.  Lorenz followed with a two run single that scored Reynoso and McLean and that would be all the runs the Gators would need in this one. Lorenz earned her 15th multi-hit game of the year after her two run single.

Georgia would later score one run but it wasn’t enough for the Bulldogs.

Florida will close out the series on Monday at 7 p.m.