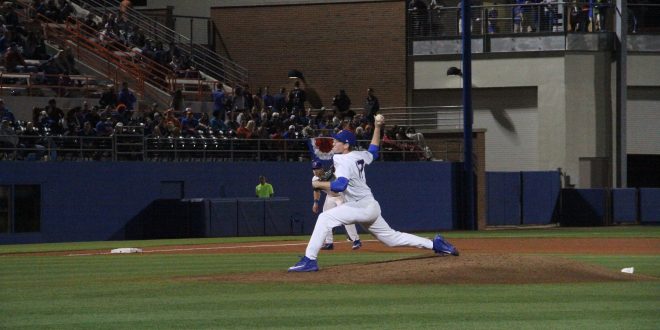 GAINESVILLE, Fla. — In the final game of a three-game weekend series with Tennessee, Florida said ‘no way’ to the broom and pulled out a 5-4 win over the Volunteers, avoiding the sweep.

Gator pitcher Michael Byrne was the man of the hour, helping the Gators to the final six outs they needed to avoid a sweep against Tennessee.  He recorded his fifth save of the season after being the losing pitcher in the first two games of the series.

The Vols dug themselves out of a 5-0 deficit to claw within 5-4, and they loaded the bases with no outs in the eighth. Byrne managed to hold them off but not without a little help from his teammates.

Dalton Guthrie made stunning play for the first out, an over-the-shoulder sliding catch on a blooper hit to shallow left-center. Gator coach Kevin O’Sullivan described the play as “game-saving”.

Byrne followed up, striking out Max Bartlett. He then made quite the athletic play of his own, snagging a ball that took a hard bounce above his head to throw out Justin Ammon to end the inning without giving up the lead.

O’Sullivan said Bryne is developing into a guy that they trust in tough situations like Sunday.

Florida left 34 runners on base throughout the weekend, a problem that has come back to bite the Gators at times; seven of their 11 losses this season have been a one run margin.

O’Sullivan said they’re going to have to do the little things right in order to stay successful in conference play.

The Gators hopped on the board early with a run in the second. Nelson Maldonado walked and a single by Hicks moved him into scoring position. After Nick Horvath took another base on balls, Deacon Liput ribbied Maldonado in on a fielder’s choice.

They tacked on another the following inning when Schwarz found his way home on a wild pitch after singling. Ryan Larson helped to work him around with a single to the right side.

Single to right scores another run. Runners on the corners again, Larson coming up.

Florida put up three in the fourth to go up 5-0; Dalton Guthrie walked with the bases loaded to drive in a run and Schwarz hit a sacrifice fly.  Mike Rivera singled in the final run of the inning.

Tennessee closed the gap in the sixth with three runs. Three straight singles loaded the bases and a run scored when designated hitter Pete Derkay was hit by a pitch.  Pinch hitter Will Heflin drove in a run with a fielder’s choice and pinch hitter Luke Lipcius singled a run.  The inning ended when a Tennessee base runner was thrown out after he slipped and fell rounding second base on the hit.

Tennessee mustered one more run in the eighth but Guthrie’s defensive play and relief work by Byrne ended the rally.

Round three of the Sunshine Showdown Series will commence on Tuesday as the Gators head to Tallahassee to take on Florida State. Florida won their two previous meetings this season and hope to solidify their dominance over the in-state rivals. First pitch is set for 6 p.m., you can watch the game on ACC Network Extra or tune in live at ESPN 98.1 FM and WRUF 850 AM.