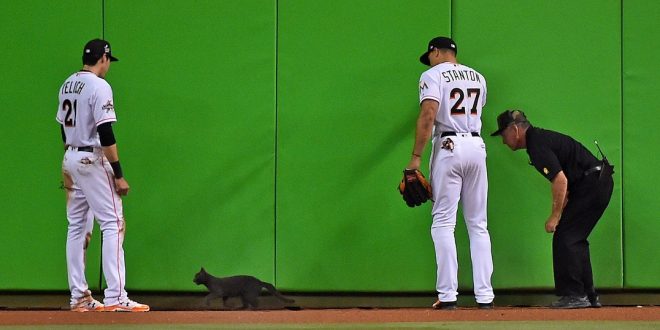 Marlins, Braves And A Cat

The Miami Marlins first game at home Tuesday night was full of excitement. From homeruns to a gray cat, the Marlins 8-4 victory over the Atlanta Braves is going to be hard to forget.

Marlins center fielder Marcell Ozuna hit two home runs and drove in six runs. In the third inning, Ozuna ripped his first homer off Braves starter Bartolo Colon that drove in three runs to extend the lead to 6-0. The game took a weird turn following Ozuna’s second home run in the fifth inning — a cat was spotted on the warning track in front of the Marlins bullpen.

Black cat pulls off the ultimate getaway at Marlins Park.pic.twitter.com/UGp14c5epz

“I wasn’t going to touch it,” said Marlins center fielder Christian Yelich. “It was pretty scared. The last thing you want to do is grab it and it claws you up.”

After climbing up to the Marlins motorized sculpture in left field, the sculpture was turned off for the cat’s safety.

Pitcher Dan Straily earned his first win as a Marlin. Giving up three runs over five innings, only two were earned.

Straily gave credit to the Marlins offense that provided him early support.

Starting at pitcher for the Marlins, Tom Koehler will be on the mound for the second time this season.

Koehler will look to redeem himself after getting bullied by the Braves last season. In 10 innings against Atlanta last year, he allowed 10 runs along with a 5.91 ERA. Facing off against the Nationals, Koehler gave up one run through five before a game delay ended his time on the mound.

For the Braves, Jaime Garcia will start at pitcher. In his season debut, Garcia allowed four runs in six innings against the Mets. Garcia is striving to play his second full season since 2011 after years of arm trouble.

Previous Tony Romo’s NBA Career Shut Down Before It Even Began
Next Preview: Miami Heat Have A Chance to Make The Playoffs