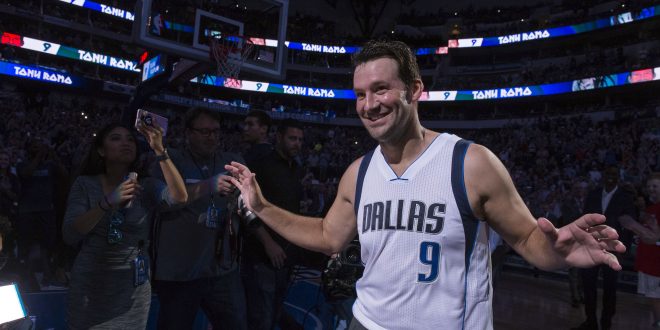 Tony Romo’s NBA Career Shut Down Before It Even Began

Tony Romo seems to be a man of many talents. Former Dallas Cowboys quarterback has a passion for not only the Cowboys but also for the Dallas Mavericks.

On Tuesday, Mavericks owner Marc Cuban really wanted to have Tony Romo play for the team under a one-day contract. Romo who had basketball scholarships coming out of high school was honored during Tuesday’s nights game against the Denver Nuggets.

NBA commissioner Adam Silver was not so fond of the idea, refusing to have his one-day contract honored. This didn’t stop him from warming up with the team and even making a shot over Mavericks guard Devin Harris during warm-ups.

Tuesday’s 109-91 loss to the Denver Nuggets wasn’t meaningful, as neither team is in the playoff hunt.

The former quarterback guided the Cowboys to four postseason appearances and was named to the Pro Bowl four times. Romo also holds several of the Dallas records including passing touchdowns, passing yards, and having the most games with three or more touchdown passes.

Despite his 97.1 passing rate, Romo’s reputation was affected by his lack of postseason success. Having won only two of the six playoff games he’s appeared in Romo has never advanced beyond the divisional round. Following a back injury in the Cowboy’s third preseason game against the Seattle Seahawks, Romo missed the first 10 games of the regular season. Next in line for the position was rookie Dak Prescott who held the starting slot all season.

Romo announced his retirement April 4, 2017 and was released by the Cowboys afterwards per request. He was hired shortly after by CBS to serve alongside Jim Nantz as a color commentator during NFL games.

Mark Cuban wanted Tony Romo to suit up for the Mavs last night.

Adam Silver said the contract would not be honored. https://t.co/LO691a9D0Q pic.twitter.com/A6hA9rLdon

With the regular NBA season coming to a close, the Mavericks finished out their season 32-49 and 12th in the Western Conference. The team will begin their off season training since they are not in the playoff hunt.

Previous Preview: Gators Softball vs. FSU
Next Marlins, Braves And A Cat