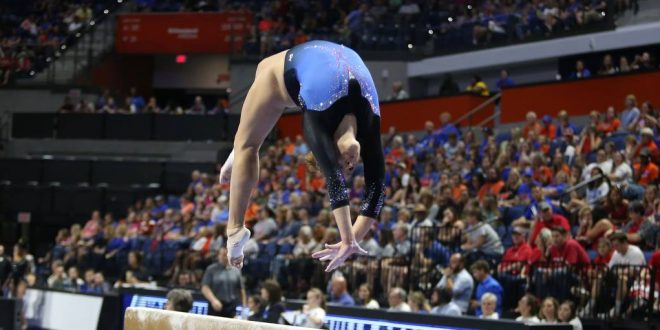 The Florida Gators are in St. Louis, MO this weekend as they take on the NCAA Championship. The championship will consist of 12 teams in two semifinal sessions starting tonight. The Gators will compete in the NCAA Semifinal II, which is set to begin at 8 p.m. ET in St. Louis’ Chaifetz Arena.

How The Gymnasts Are Preparing

Alicia Boren has been looking forward to this day since last year. She is excited to redeem herself after falling on vault at last year’s competition. Amelia Hundley believes it’s most important to focus on each other and build on each other during the competition.  Head coach Jenny Rowland says she wants to team to focus on having fun and doing the best they can. She’s happy with everything the team has accomplished this year.

Florida has qualified for the NCAA Championship 35 times. Florida finished fourth in the 2016 NCAA Super Six Final with a score of 197.35. The NCAA individual event champions are determined on Friday’s semifinal sessions. The Gators have won 16 NCAA individual titles.

This years 2017 SEC Gymnast of the year is Alex McMurtry. She was the first in Florida history to earn this honor and the 2017 Scholar-Athlete honor in the same season.

Tune into ESPNU for coverage of Friday nights competition. For Saturday night’s Super Six Final, the coverage will switch to ESPN.

Sydney is a senior studying telecommunications with a specialization in sports media at the University of Florida. She is a multimedia sports reporter for ESPN 98.1 FM/850 AM WRUF and WUFT-TV.
Previous Preview: Gator Softball vs. Kentucky
Next NBA Playoffs Preview: Bulls Battle the Celtics