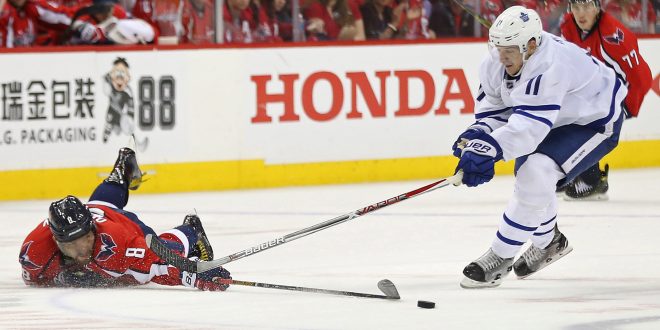 It was a four-game night of playoff hockey on Monday and the competition is looking fierce. All four matchups went into overtime for game 3 of the series.

The Toronto Maple Leafs have stunned hockey fans with an OT win again. They now lead their Eastern Conference series 2-1 against the top-seeded Washington Capitals after earning a 4-3 victory on Monday.

The Leafs, who have the upper hand in the best-of-seven series, are proving to be a team worth recognizing. They were doubted to win the series over the Caps, mainly because of their inexperienced roster of 10 players who made their NHL playoff debuts, but it has not been an issue thus far.

Washington’s big guns carried the team to a quick 2-0 lead. Nicklas Backstrom scored just two minutes into the first period on a pass from Nate Schmidt and Alex Ovechkin scored two minutes later on a one-timer from the top of the left circle. Toronto’s Auston Matthews cut the lead 2-1 when he put one in past Braden Holtby’s glove on his own rebound. Toronto managed to come back from a two-goal deficit in the second period. Nazem Kadri and William Nylander’s goals tied the score in the final minute of the period. It was a nail-biter once again. The Caps and Leafs were sent into their third overtime game in the series, but Tyler Bozak sealed Toronto’s fate, scoring on a power-play goal 1:37 into OT.

With an OT-winner from @Bozie42, @MapleLeafs fans go crazy inside and outside. #StanleyCup pic.twitter.com/HEw4FVKmN5

Bozak says just because the Leafs have won, it does not mean they can start slacking off.

Game 4 of the Eastern Conference First Round will be on Wednesday at Air Canada Centre at 7 p.m.

The Boston Bruins rallied from a 3-0 deficit with three goals in the second period, tying the game on a power play goal, but it wasn’t enough to grab the win. The Senators squashed Boston’s hopes of winning two games in a row thanks to two goals from Mike Hoffman, one from Derick Bassard and the OT game-winner from Bobby Ryan. The Bruins made up for their slow start and made strides offensively in the second period. Noel Acciari and David Backes scored within 42 seconds of each other, putting Boston up on the scoreboard before David Pastrnak made it a tie game in the last six minutes of the period.

Ryan says Ottawa gave up some chances, but never gave up, even when they were hurting.

After letting it’s three-goal lead slip, Ottawa recovered with a tip-in goal from Bobby Ryan on a power-play in overtime to beat the Bruin 4-3. The Senators took a 2-1 edge in the first-round series on Monday.

Game 4 is Wednesday night in Boston.

Predators Push Blackhawks to the Brink of Elimination

The Nashville Predators, like many other teams on Monday, rallied from a deficit of their own. The Predators made their comeback after being down two goals in the third period. Chicago has been the winner of three Stanley Cup titles in the past seven years, but is now being put to the test. The Blackhawks are 0-3 in the series for the first time since the 2011 quarterfinals. After a scoreless first period, Dennis Rasmussen and Patrick Kane got Chicago on the board with two goals.

Kane says he wishes things have gone differently, but the Predators have been playing a lot smarter.

"Take it one at a time. I know it's cliché… Win one game. See what happens after that." pic.twitter.com/2kvisXVubO

Nashville’s Filip Forsberg scored twice in the third to force overtime and with less than four minutes left in OT, Kevin Fiala scored on a backhander to give the Predators the 3-2 win.

The fourth game of the night was much like the others: an impressive rally that sent the contest into overtime.

The Calgary Flames occupied a 4-1 lead midway through the second period, scoring three power-play goals on five chances, but quickly fell apart in their home arena.

Anaheim went on to score four unanswered goals, two of which came from a defenseman. Shea Theodore started the comeback with 49 seconds left in the second as his shot deflected off Flames goalie Brian Elliot’s pad. Nate Thompson followed with a goal 11 minutes into the final period and Theodore scored his second of the game on a shot from the point to tie it with less than five minutes remaining. The Ducks ended with just over a minute into OT as Corey Perry’s shot deflected off several players before landing in the net. Anaheim leads the Western Conference series against the Flames, 3-0.

Perry says Anaheim doesn’t quit and the team found a way to take back control of the game.

The Flames get one more chance to extend their playoff lives in Game 4 on Wednesday night. 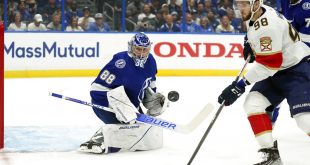