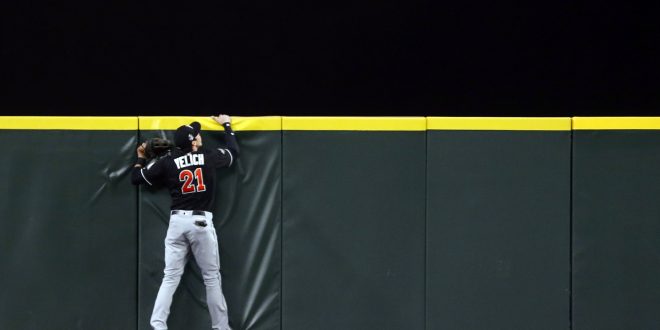 The Marlins played their first of a nine-game road trip when they visited the Seattle Mariners yesterday. After a tough inning out of the gates for Miami starting pitcher Tom Koehler, the Marlins played catch up for the rest of the evening. Mariners starter Ariel Miranda, equipped with an early cushion, closed the door early and held the Marlins scoreless after seven innings. The day ended with a 6-1 victory for Seattle.

Miami, Koehler Shelled in the First

It was a night to forget for Koehler who surrendered an early lead to the top of the Mariners starting lineup. As a pitcher, the first three batters faced can set the tone for the rest of the game. As a starter, it’s a great feeling to relieve the opposition’s first three. But if something goes wrong, it’s easy to be rattled and can be difficult to come back. Playing from behind is never a good feeling, and yesterday the Marlins couldn’t climb their way back into the game.

It began in the top of the first when Koehler faced Mariners’ outfielder Jarrod Dyson. Dyson worked a leadoff walk, but Koehler struck out the next batter. With one man on base and one out, Seattle all-star second baseman Robinson Cano stepped up to the plate. Cano, down in a 1-2 count, ripped the next pitch 441 feet to deep right center.

Koehler said the two pitches he delivered to Cano and Cruz were breaking balls that just didn’t quite get there.

Mariners’ DH Nelson Cruz followed his teammate up with a homer of his own, a solo shot. Koehler managed to strike out the next two batters. Despite the next two hitters unable to connect at the plate, Seattle held a comfortable 3-0 lead heading into the top of the second.

The Miami starter’s rough outing wouldn’t end in the first. Mariners’ center fielder Leonys Martín singled to first. After stealing second, Martín found his way to third after a throwing error by Koehler. With a runner on third, Dyson doubled bringing Martín home. Cano returned to the plate and knocked an RBI double to left. While the inning ended there, so would Koehler’s day.

While it certainly was a night to forget for Miami’s starter, the Marlins’ bat provided little to work their way back into the game. Credit to Miranda, whom after seven innings conceded only four hits. During that time, he surrounded no scores and no walks. Additionally, Miranda added 5 K’s to his tally. Seattle catcher and former Gator Mike Zunino said Miranda worked his entire arsenal.

The only score for the Marlins came in the 9th off of Mariners’ reliever Evan Scribner. But by this point it was too little, too late for the away team.

The Marlins are hoping they can correct themselves for the rest of their road trip. They currently sit at one game above .500 with a 7 – 6 record. Miami looks to get back on track this evening at 10:10 p.m. EST. They’ll be back against the Mariners, with left handed pitcher Wei-Yin Chen on the mound for the visiting side.