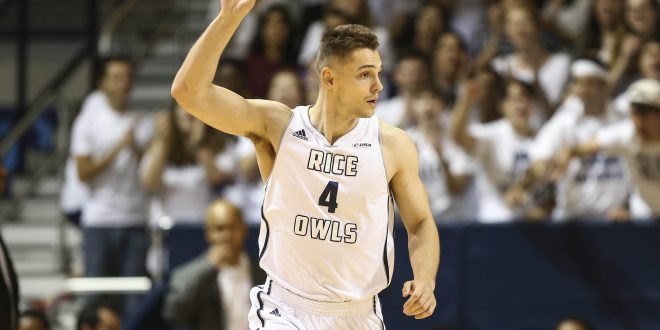 BREAKING: Egor Koulechov To Transfer To The University of Florida

Egor Koulechov, a graduate transfer from Rice University, has decided to transfer to the University of Florida for his final year of eligibility as first reported by Evan Daniels of Scout.com. Koulechov is a 6’5″, 210 pound guard who averaged 18.2 points and 8.9 rebounds per game in his junior year at Rice. He started his NCAA career at Arizona State, but transferred to Rice after only playing 14 minutes per game. Koulechov is eligible to play immediately.

Egor Koulechov is a huge pick up for Mike White & the Gators. Has 161 three-pointers in the past two seasons.

Egor Koulechov is a nicely sized two-guard who can shoot the ball from anywhere on the floor. Koulechov shot 47.3% from the field last season and 47.4% from beyond the arc. He recorded 13 double-doubles last year with Rice and was named to the All-Conference USA First Team. Koulechov played high school basketball in South Florida at The Sagemont School in Weston, Florida, but grew up in Israel. He played for Israel’s U20 national basketball team but was born in Volgograd, Russia. The areas where Koulechov will need to improve the most are defense and ball security. The graduate transfer averaged 2.0 turnovers per game last season and at times lagged on defense. As it has been made abundantly clear, Mike White will limit his player’s playing time if they don’t give it a 100% effort on defense.

What Will Koulechov’s Role Be?

Egor Koulechov will be filling in the role that Canyon Barry carved out during this past season. Koulechov will be instant offense off of the bench who can shoot the three-ball well and can crash the boards satisfactorily for his size. He scored at least 20 points in 13 games last season.

Koulechov will also fill Florida’s final scholarship spot, putting the Gators at 13 of 13 scholarship players. If John Egbunu does declare officially for the NBA Draft and hire an agent, Florida will once again have an open spot.

Egor Koulechov: "It just feels right to go back where it all started and I trust the coaching staff in Florida." He went to HS in Florida.

Florida Gators Men’s Basketball has opened the season on a six-game winning streak. After starting …