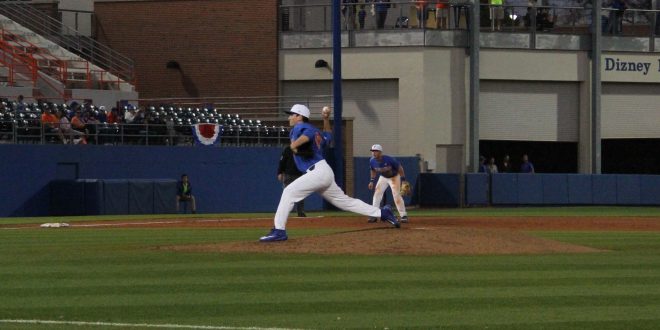 Midweek games have been mostly forgettable for the Florida Gator baseball team this year. This Tuesday, though, UF churned out a good win at home against the North Florida Ospreys, 2-1. They play South Carolina this weekend starting on Thursday.

Nate Brown got the start for the Gators. It was a modest three innings of work for the freshman, allowing six hits and one earned run. Inefficiency was his downfall; Brown faced 14 batters and threw the ball across the plate 54 times.

In came senior Frank Rubio in the fourth inning and he shut down the Ospreys. His last appearance was on March 26, when he didn’t even record an out but allowed a two-run bomb to the opposing Tiger.

This time around, Rubio pitched four scoreless innings only allowing two hits and striking out three.

Rubio has done great in four innings of work. Heading into the 7th inning stretch, #Gators up 2-1.

Garrett Milchin tossed a clean eighth inning and then Michael Byrne recorded his sixth save of the season in the ninth.

This game was another example of the Gator offense just doing enough to get the win. North Florida struck first in the fourth inning when Christian Diaz scored Alex Merritt to give them the 1-0 lead.

Florida didn’t take long at all to respond, tying the game in the next half inning via a double from JJ Schwarz to score Austin Langworthy.

With two outs and on the first pitch, Schwarz rips the ball to left center for a stand-up RBI double. #Gators tie it at 1-1.

The Gators would take the lead in the fifth with a single from Dalton Guthrie, scoring Keenan Bell.

Florida will play in another weekend series that starts on a Thursday, this time at home against South Carolina.