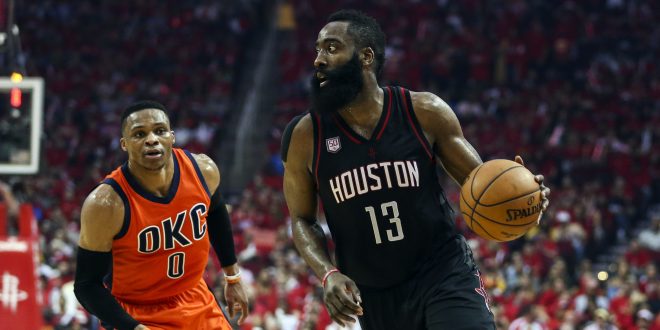 Despite 51 points put on the scoreboard by Russell Westbrook last night, the Oklahoma City Thunder fell to the Houston Rockets again.

The Rockets continue to lead, now 2-0, in the first round of the Western Conference playoff series after their 115-111 win last night.

The Thunder were the first to get on the board early in the first period with a dunk by Andre Roberson, who was assisted by Steven Adams.

Once the points started to rack up for the Thunder, they held a lead over the Rockets until the fourth quarter.

During the second and third period, the Rockets started to gain momentum. Each time the Thunder took another significant lead, the Rockets came back and closed the point gap more.

However, the Thunder started to lose their rhythm during the fourth. After Westbrook missed a driving layup, Rockets’ Eric Gordon had a defensive rebound and hit a three point jump. He was assisted by Patrick Beverley.

The Rockets took the lead, but the Thunder trailed closely behind them. Westbrook makes a two pointer and puts the Thunder back in the lead at 100-99, but Rockets’ James Harden makes a layup putting the Rockets’ ahead again.

With close to three minutes left in the fourth, Beverley had a loose ball foul and Westbrook drew. Westbrook made both free throws, which tied the game at 104-104.

Shortly after, there was another foul. Harden drew and made both free throws, which put them back in the lead. From this point to the end of the game, the Rockets held the lead and the Thunder fell behind.

“They made some big shots and we couldn’t score at the rate we were before,” Westbrook said. “We can’t give away leads like that on the road. It’s too difficult to be able to do that, especially against a good team.”

Thunder’s head coach Billy Donovan commented that the team corrected what they needed to in the first half, but didn’t keep it up in the second.

Both the Rockets and the Thunder had players who scored a large number of points in last night’s game.

With the highest-scoring triple-double in playoff history, Westbrook had 51 points, 10 rebounds and 13 assists. Harden had 35 points and eight assists.

Although it was an upsetting loss for the Thunder, Westbrook talked about the trust he has in his teammates.

“I trust in my teammates all the time,” Westbrook said. “Regardless of what’s going on, I always trust in my guys. They trust in me to make plays. That’s what we have been doing since the start of the season… I’m always going to do that.”

Looking ahead, Westbrook said that it is one game at a time. The Thunder return home for game three of the series, which is tomorrow night at 9:30.