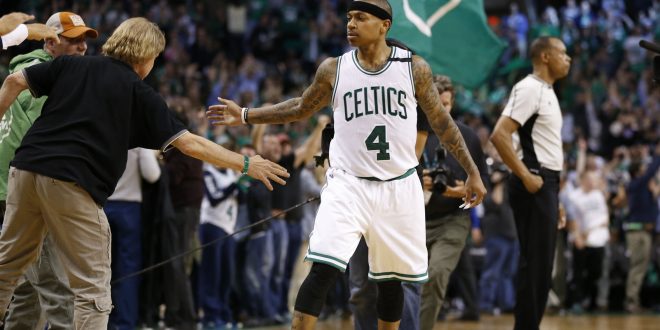 NBA Playoffs: The Chase to the Championship Continues

The NBA Playoffs continue Wednesday night after a set of dramatic games Tuesday night. After Isaiah Thomas’ 53-point showcase and a Warriors win, what’s next?

The @celtics went up 2-0 and the @warriors went up 1-0 in Tuesday’s #NBAPlayoffs action! pic.twitter.com/f9TpLGvdv4

Firstly, the emotions would be at an all time high. PG Isaiah Thomas and the Celtics would fight to a 129-119 victory at home to get the 2-0 series lead. After scoring 53 points for Boston, the question becomes what helped Thomas through this. For him, it’s the memory of his sister on her 23rd birthday.

The performance on Tuesday night was one that would surprise the entire team as far as emotions, including C Al Horford. The team defeated a sound Washington Wizards unit, behind a usual John Wall performance. Wall would have 40 points and 13 assists in the loss on Tuesday with praise for Thomas afterward. The Wizards are looking to adjust their game plan to lead them to victory when these teams face off again on Thursday night.

So you already know IT dropped a career-high 53 last night. Now it's time to relive it. Enjoy… pic.twitter.com/vdSyxoncYn

Secondly, the no. one seed for the West continues its run to a second title in three years. The Golden State Warriors and the Utah Jazz do battle at the Oracle Arena in Oakland. The Warriors would do Warrior things as always. Coming away with a 106-94 victory on Tuesday night, Golden State now leads their series 1-0.

PG Stephen Curry would contribute 22 points in three-quarters, while an unusual performance from SF Kevin Durant, who would total 17 points, 7 for 17 shooting, five rebounds, and five assists, would lead the Dubs past the Jazz. They believe the key success in the opening salvo against Utah was being able to dictate the pace of the game, at least according to Curry.

SF Gordon Hayward (12 points, four rebounds and four assists) also has praise for the performance of the Warriors on Monday night and doesn’t want to blame fatigue on the game one loss. In Hayward’s eyes, the fast-break scoring ability of Golden State. The Jazz were never out of the game, with Rudy Gobert leading the team in points, rebounds, and blocks.

The series for both the Wizards and Jazz are still within reach. Thursday night will see the continuation of both series as they look to advance to the finals and capture the NBA championship trophy when the dust settles.

Tonight, the East and West semifinals continue as the Cleveland Cavaliers and Toronto Raptors do battle for the East continues. Meanwhile, in the West, the San Antonio Spurs and Houston Rockets continue their series for supremacy. The Raptors will travel to Cleveland for game two, while the Rockets play at San Antonio for their game two. The Cavs and the Rockets both lead their series’ 1-0 with Toronto and San Antonio looking to even the score.

The Cavaliers look to #DefendTheLand and continue their road to the repeat. Coming off the miraculous 1-3 deficit in 2016 to their lone championship thus far, they look to repeat history. Coming off a 35-point game, LeBron James and company look to further distance themselves from the Raptors on the road to victory. Damien Lillard and team look to do otherwise. The Raptors look to get on the board tonight on the road.

In the West, James Harden looks to continue his MVP race and lead Houston to a 2-0 series lead over San Antonio. Khawai Leonard wants to sweep his hot hand into San Antonio and help his team also get on the board and tie up the series at home. Tonight will promise to further solidify which team is hot and which is not in the chase for the championship.

“Where Can I Watch?”

Tonight’s round two double-header will be broadcasting live on TNT. To start, the Cavs host the Raptors from Quicken Loans Arena in Cleveland at 7:00 p.m. Following that, the Spurs will host the Rocketsatm the AT&T Center in San Antonio at 9:30 p.m. Live, up-to-date coverage will be available on the official NBA Twitter, as well as right here on ESPN Gainesville.