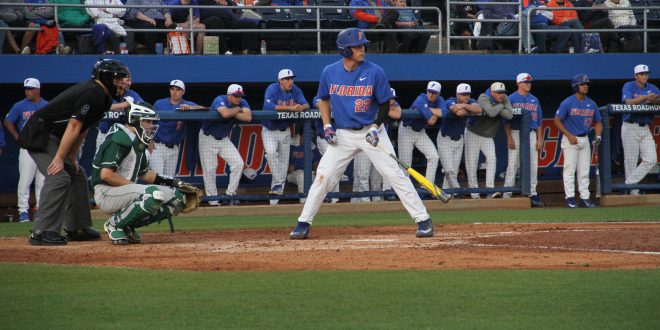 Despite low attendance because of Break Week on the University of Florida campus, the Gators were able to pull out the win.

Early in the Game

Florida scored the game’s first run in the bottom of the first when JJ Schwarz singled to bring home Deacon Liput who led off the game for the Gators with a walk.

JJ comes through in the first!

A RBI single to right scores Liput from second.

Freshman Nick Long got the start on the mound for Florida but wildness was his undoing.  After walking the first two hitters in the third inning, giving him four walks on the night, Long was replaced by fellow freshman Nate Brown who walked two more hitters, forcing in a run.   A ground out produced another run but further damage was avoided.  Jacksonville led 2-1.

In the fourth inning, the Christian Hicks Show began.   The Gator third baseman cracked a solo homer to tie the game at 2-2.  After the game, Gator coach Kevin O’Sullivan said Hicks had a great night and that he has been one of Florida’s most versatile players this season.

With one out on the board in the fifth inning, lefty Nick Horvath came in to relieve Brown after Evan Fernandez for Jacksonville hit a double. Horvath got back to back strikeouts to end the inning.

In the 6th, JU’s John Cassala hit a fly ball to right that Florida’s Nelson Maldonado dove for but missed; the ball rolled into the corner for a triple as Maldanado stayed on the ground injured.  Maldanado had to come out of the game and the hope is he will be all right to play this weekend against Ole Miss.  Despite the triple, the Dolphins could not score in the inning and that set the stage for more from Christian Hicks.

The Man of the Night

With two outs and Austin Langworthy at first, Hicks drilled a two run homer to right, his second homer of the night and it gave Florida a 4-2 lead.  Hicks says having the opportunity to come up the plate more this season has been good for him.

Closing Out the Win

Florida would put away the game in the seventh inning.  Blake Reese had an RBI infield hit as a hustling Dalton Guthrie scored all the way from second base.  JJ Schwarz later singled to drive in Austin Langworthy with the game’s final run.  Freshman Tyler Dyson was excellent in relief, throwing two scoreless innings to seal the victory for the Gators.  Coach O’Sullivan thinks Dyson has really been starting to find his rhythm in the latter half of this season.

A couple of #HicksHomers and seven shutout innings from the bullpen gives us six in a row! #GatorsWWWWWWin pic.twitter.com/v7875rBnyQ

The Gators will be hosting SEC opponent Ole Miss this weekend with Friday’s game set to start at 6:30 pm.