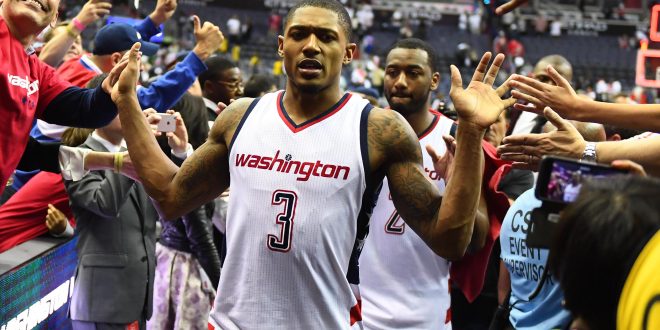 The NBA playoffs are continuing with several series still underway but others have come to a conclusion.  In the Eastern Conference, the Cleveland Cavaliers completed a series sweep of the Toronto Raptors and the Washington Wizards evened up their series with Boston Celtics at two games apiece. Out West, the Houston Rockets defeated the San Antonio Spurs to bring their series to a 2-2 tie.

The Cavs finished up their series against the Raptors with a 109-102 victory and can now rest a bit before facing the winner of the Celtics-Wizards series. After the game, Cleveland guard Kyrie Irving said that close-out games are never easy. As Irving said, Game 4 may have been difficult for the Cavs, but they certainly seemed to breeze through this round. They won each game against Toronto by an average of just over 15 points a game.

Raptors head coach Dwane Casey points to LeBron James as the X-factor and says the Cavs have been a different team since the All-Star break.  Toronto did their best to extend the series, but couldn’t seem to find an answer for the dynamic duo of LeBron and Kyrie. Check out the per-game damage the Cleveland stars did against the Raptors during this series…

The Raptors kept Game 4 close until the very end. They even had a one-point lead with just over six minutes left in the game until Kyrie and Co. went on an 11-2 run to put the Cavs up 103-95 with four minutes remaining. Serge Ibaka scored 23 points and DeMar DeRozan went for 22, as Toronto tried to make up for the absence of Kyle Lowry who missed the game with an ankle injury.

In the other Eastern Conference Semi-Finals match-up, Washington defeated Boston 121-102 to even up their series at two games apiece. For the second straight game, the Wizards kept Celtics star guard Isaiah Thomas in check. In the first two games of the series, Thomas averaged 43 points. Since the series shifted to Washington, he’s averaged just 16 points. Bradley Beal stepped up big time for the Wizards. He totaled 29 points and guarded Thomas well for much of the second half. After the game, Beal touched on the importance of good team defense and being physical while guarding Thomas.

The physical play certainly didn’t go unnoticed by Isaiah Thomas. In his post-game press conference, Thomas griped a little about the lack of calls by the officiating crew. In his comments he specifically mentions the poor officiating in the third quarter, the same quarter in which the Wizards went on a 26-0 run. Washington was able to come away with a Game 4 victory despite the absence of Kelly Oubre Jr., who was suspended for his altercation with Kelly Olynyk in Game 3. John Wall scored 27 points after missing his first nine shots from the field and Otto Porter Jr. contributed with 18 points of his own.

In the Western Conference, after dropping Game 3 at home, Houston bounced back with a convincing 125-104 victory over the San Antonio Spurs to even the series at two games each. The Rockets played the game with a heavy heart after learning of the passing of Patrick Beverley’s grandfather. An emotional Beverley scored 10 points in the Rockets victory and after the game he discussed how important his grandfather’s support was to him during his journey to the NBA.

As is often the case, James Harden led the way offensively for the Rockets. He scored 28 points and Eric Gordon added 22 to give Houston the offensive firepower they needed to take down the Spurs. Houston got off to an early lead, ending the first quarter up 34-22 and never looked back. San Antonio head coach Greg Popovich spoke after the game about his team’s poor defensive effort, particularly in transition.

Tonight the Golden State Warriors are on the road and looking to complete a sweep of the Utah Jazz. The game time is set for at 9 p.m. On Tuesday, the Rockets continue their series with the Spurs in San Antonio. Game 5 is scheduled to start at 8 p.m.  Then on Wednesday the Celtics will look to straighten things out at home against Washington. Game 5 for that series is set for 8 p.m.

I'm an above-average golfer with surprisingly great touch around the greens. Click on my twitter link for some sports talk.
@Ry_McGinn
Previous FEATURE: Johann Rapp Chips and Charges Through Life
Next FEATURE: Excellence of Intramural Sports at the University of Florida

James Harden announced his departure from the Rockets during mid-January after playing eight-plus seasons. Since …