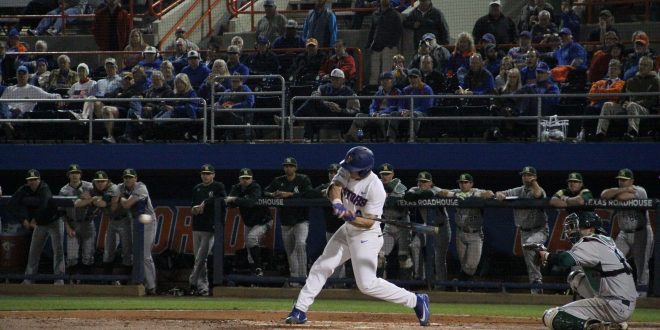 The 23rd ranked USF Bulls (38-10, 12-6 AAC) came into Gainesville and knocked off the Gators (35-14, 16-8 SEC) by a score of 15-10. USF controlled the game the entire way, essentially putting the game away by the fourth inning. The five run loss is Florida’s largest margin of defeat at home all season.

Freshman pitcher D.J. Roberts improved to 3-0 on the season for USF after a strong outing in which he went seven innings, and gave up just two earned runs on six hits. Garrett Milchin got the start for Florida and dropped to 4-2 on the season after he only went two innings, allowing two earned runs on two hits and two walks. Nate Brown gave up four earned runs on four hits and got no outs in a relief appearance. Overall, all six Gator pitchers gave up at least one walk and five out of the six gave up at least two runs in a less than stellar night for the young bullpen.

The Gators pitching staff struggled to throw strikes all game long. They combined for a whopping 17 walks on the night, by far the most ever during Kevin O’Sullivan’s tenure as head coach. The prior record had been 10 walks.

And after a wild pitch, it's now a season high 15 runs allowed.

O’Sullivan likened the bizarre night to how bad free-throw shooting can be contagious in basketball, saying “tonight was just one of those nights… it just got out of hand.”

And when Florida’s pitching staff did find the strike zone, they were punished to the tune of 15 runs on 13 hits.

First baseman Joe Genord had himself a day (3-for-5, 2 HR, 4 RBI) for USF, and he got it started with a two-run blast in the top of the first inning.

The Bulls would lead the rest of the way.

Bulls Run Away With the Lead

After a Jonathan India (2-for-3, HR, 2RBI) home run in the second pulled the Gators within one, USF blew the game open with six runs in the third inning. Again Genord started things off, this time with an RBI single. USF proceeded to score on an RBI groundout, a two-RBI double from second baseman Coco Montes, and two-RBI single from lead-off man Kevin Merrell. The Bulls led comfortably 8-1 after the inning, and the game was never really in doubt after that.

Among the only bright spots of the game for Florida was the production at the plate. Schwarz saw India’s sixth homer of the season, and raised him one, launching his seventh blast of the season in the fourth inning to make it an 8-2 ball game.

After the teams traded runs in the fifth, Genord’s second home run of the game, this one a solo shot, gave the Bulls a 10-3 lead in the sixth inning before catcher Tyler Dietrich tacked on another run with an RBI double.

Designated hitter Luke Borders launched USF’s third home run of the game in the eighth to make it 13-3. They proceeded to add two more in the ninth.

The Gators attempted a miraculous late game rally, and almost pulled it off. They put up five runs in the bottom of the ninth in a two-out rally. India got his second RBI of the night on a sac fly. Then, the Gators scored twice on bases loaded walks, and Ryan Larson got a single with the bases loaded that scored two runs. Larson (2-for-6, 2 RBI) extended his hitting streak to a now career-long 10 games.

The rally came up just short though, as Deacon Liput grounded out to first to end the late game rally.

Florida will now turn it’s attention to a weekend series against Alabama before hosting Kentucky in the regular season finale with the SEC East and the overall league title possibly on the line. However, there remains the possibility that Florida could play the Bulls again at some point in an NCAA Regional.

When asked about possibly seeing USF again, O’Sullivan said that it’s hard to look ahead because USF may host a regional, but he did add that “it’s different. We’ll see their weekend starters and they’ll see ours. It’ll be different.”