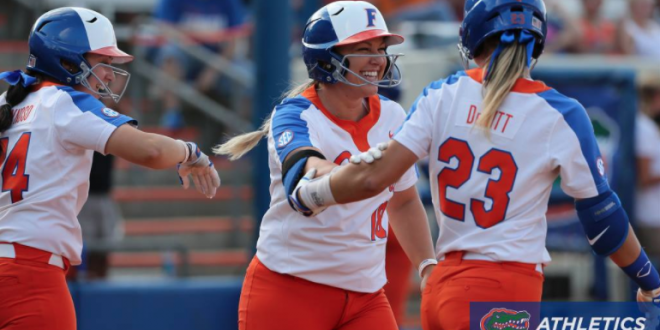 The nation’s top-ranked Florida softball team (50-6) fell 2-0 against the Ole Miss Rebels (38-18) in the quarterfinals of the SEC Softball Tournament Thursday in Knoxville, Tennessee. The loss eliminates the Gators from the tournament.   Starting pitcher Delanie Gourley is 18-4 this season after shouldering the loss for top-seeded Florida. Rebel pitcher Kaitlin Lee (19-10) threw a complete game, allowing just two hits in the shutout.

The Rebels Relied on Small Ball

Florida lost momentum in the top of the first as Ole Miss’ Dylinn Stancil sent in a two-out, two-RBI double down the right field line. The two-run shot was set up by Elantra Cox’s lead-off single and Kylan Baker’s reach on a fielding error. With two runners on base, Ashton Lampton put down a sacrifice bunt to advance both Cox and Baker.

With runners threatening, Gourley got back on track with a strikeout before Stancil stepped up and delivered what would prove to be the winning runs.

Gourley ended her day with five innings pitched, allowing seven hits and two unearned runs. Despite the early runs, Gourley totaled an impressive seven strikeouts. Kelly Barnhill stepped in the circle to close out the sixth and seventh innings, adding four K’s of her own.

The Pitching staff of Gourley & Barnhill combined for 11 K's but Ole Miss scored early and the final stood 2-0 Rebels. pic.twitter.com/bvU1Eyrass

The Gators went three up and three down in their first three innings. Lee earned four strikeouts in seven innings pitched for the Rebels. True to form, in the bottom of the fourth, Kayli Kvistad was the first Gator to get on base with a single to centerfield. Nicole DeWitt would fly out and Janell Wheaton would ground out, leaving Kvistad stranded.

Florida’s next scoring opportunity came in the bottom of the seventh as Wheaton saw her two-out single settle down in left field. Wheaton was left on base as Aleshia Ocasio hit a pop up to produce the final out.

The Gators will now look towards May 18-21, where they will host an NCAA Regional matchup.

I'm a senior studying Political Science at the University of Florida. Multimedia Sports Reporter for ESPN Gainesville 95.3 and WUFT - Passionate about life, sports, and fitness.
@charliejordanuf
Previous Florida Womens Tennis Host Start Of NCAA Championship
Next No. 5 Gator Baseball Travels to Alabama as It Looks to Keep SEC East Lead